Adrien Brody on His Tribeca Premiere Detachment, the Genius of Tony Kaye, and That Stella Artois Ad 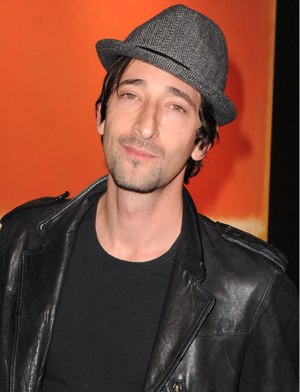 Though it may not look like it outside our windows at the moment, it's that time of year again in New York -- when the birds chirp, the flowers blossom and the international film community descends for the 10th annual Tribeca Film Festival. Among the visitors set to attend: Adrien Brody, a native New Yorker returning to the festival with the much-anticipated Detachment.

Brody's collaboration with maverick director Tony Kaye (American History X, Lake of Fire) features the Oscar winner as a substitute New York public school teacher in the throes of a crisis vaguely mirroring those in the education system around him. Also included in the ensemble cast are Christina Hendricks, Marcia Gay Harden, James Caan, Lucy Liu, Bryan Cranston, Tim Blake Nelson and Blythe Danner; the film premieres April 25 and is up for sale in Tribeca's burgeoning festival marketplace. (Movieline will report back with developments on both fronts as events warrant.)

I caught up with Brody this week to discuss the personal significance of Detachment, his director's fraught legend (and creative genius), his underseen recent work and what exactly he had in mind when crooning over a glass of beer during this year's Super Bowl.

Yeah, it's very exciting, actually. I'm a big fan of the festival and, obviously, the people involved. I've been a jury member myself. I'm very happy the film's been accepted. It speaks to me on many levels -- it speaks about the education system, the public education system, and the flaws within that. I grew up going to public school in New York; my father is a public school teacher. It's something I'm very aware of, and I think it needs work. I don't have all the answers, but I think this film makes us all a bit more aware of the complexity of trying to create a place where learning is not only encouraged but helps children with complicated lives create a space that provides growth. We can become better people.

Considering your background, do you think of Detachment as a work of activism?

I think one of my goals as an actor is unfortunately not as easy to achieve as often as I would like: To find material that is meaningful on many levels and has social relevance. That is first and foremost what I'm drawn to: things that speak to me and my audience on a deeper level. My objective as an actor is to create the intimacy and the connection and a level of reality so there is a significant sharing of an experience. In some sense, I follow my father's footsteps as a teacher -- having the ability to share an experience with complete strangers and have them hopefully gain some empathy for what that character -- in The Pianist, for example -- has the potential to do. The potential to give insight to the misfortunes of others, or the strength that exists within others, or the pain that others experience that we don't experience ourselves. It creates a sense of community and understanding. Obviously, you can't do that with every film, and there is nothing wrong with film being strictly entertaining. But the beauty of finding relevant material and having something that has a deeper impact on society is deeply rewarding for any artist.

This film spoke to me for many reasons: I'm an admirer of Tony Kaye's work, and I don't feel like he's really been given the level of appreciation he deserves as a filmmaker for myriad reasons. I felt deeply drawn to the character and the subject matter overall. I know that it's a complex problem, the education system. But it's one that needs to be addressed. And New York is no exception. I think what Tribeca also stands for is to revitalize a district that's been kind of torn after the terrorist attacks of 9/11 and create a film community in Lower Manhattan. It's very positive, being a New Yorker and an actor. I'm very happy that they coexist. This film is a small part of Tribeca, but there's a deeper link. The two of them help a deeper cause, I think, and I'm grateful for that alliance.

No one's seen it yet outside a few rough-cut screenings. What can you tell me about it?

The story revolves around Henry Barthes, who is a substitute teacher, and someone who is, I'd say, quite conflicted about struggles in his own life and his own ambivalence about being sucked into all the problems that exist. I think the link between the wonderful cast that supports the story is that there is a unanimous fragility -- a combination of broken individuals -- trying to mend something greater than themselves. The students are no exception. I think that it's a somewhat harsh look at what we tend to cover up, and the complexity of all of our lives -- and how that complexity and all of our personal problems come into the workplace and go home with us and affect our children and impact their ability to learn and grow and blossom as human beings. How do they not pick up all the pain and suffering along the way and have it not impede their growth?

I think that -- in my long way of explaining it -- is the gist of the story. My character meets a young girl whose from the streets and kind of reluctantly takes her in for a period of time. They provide insight and growth for one another, and she's kind of a catalyst for him to come out of his own extreme level of detachment.

The synopsis I've been given says, "Henry's stoic front is slowly chipped away by three women who impact his view on life." Who are these women, and what do they do?

[Pauses] Well, Christina Hendricks plays another teacher at the school, and we share a bit of a connection. But...

I think they are also alluding to Betty Kaye and Sami Gayle's characters.

Oh. They're younger; I didn't think of them as "women." Young women, I suppose. Yes. Betty's character... I can't reveal too much, but she's another student at the school. Sami is kind of a wild runaway. And Christina is a public school teacher at the school I'm teaching at. And yep, they all have a part in... They all have a major impact on the character. [Pauses] Yeah.

Mum's the word, I guess.

Yeah, there's really no way I can explain it.

Fair enough. We all know and love Christina Hendricks from Mad Men. What kind of revelations can we expect from her role in Detachment?

She's lovely. I think the beauty of her performance in this is that she's very genuine. There's just a real motherly quality to her character that, for better or worse, affects my character in a way with his own problems -- his own past, and his relationship with his own mother. I think there's this really interesting dynamic that ensues. She does a beautiful job of portraying that character. I don't know how else I can describe it.