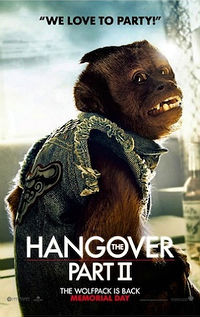 Yesterday the internet was abuzz over a report that Todd Phillips got his Hangover 2 capuchin monkey addicted to cigarettes, but today animal lovers can breathe a sigh of relief. Phillips, via email, explains to Movieline that the whole story was intended as a joke. (What's more: He assures us that Crystal the monkey didn't actually do cocaine in the film, either. Phew!) Hit the jump for the director's explanation in full.

This was a joke. I make comedies.

If you read the story, it doesn't even make sense. "On the set of her new film, she won't stop smoking cigarettes". Umm. Really? Maybe just take them away from her. Or at least take her money away so she can't buy them any longer.

When you are doing press for a film, it tends to get repetitive, lots of the same questions over and over. Sometimes I like to mix it up with the journalists. Obviously, the monkey in the film NEVER smoked a single cigarette. There are people on set whose sole job is to protect that monkey. Even if I wanted her to smoke it wouldn't be allowed. By the way, she also appears to do cocaine in the movie, but I guarantee you that she didn't do that either (I can't, however, comment on Ken Jeong's cocaine use in the film).

Sorry for the confusion, but it definitely is a funny headline "PETA pissed after Todd Phillips gets Hangover 2 monkey addicted to cigarettes." Definitely one for the office wall.

Ah, comedy. Thanks for the clarification, Todd! PETA-sponsored movie trip to see The Hangover: Part II (in theaters May 26) is back on!