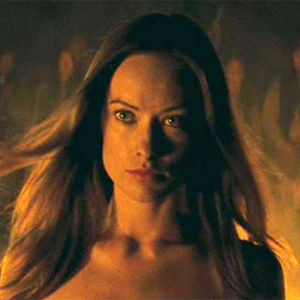 For a summer blockbuster whose makers are trying to emphasize its seriousness, Cowboys & Aliens sure is shaping up to be a fun little dust-tinged ride through the alien-infested Wild West. Or is it the Wilde West, now that marketing materials are giving fans the sense that resident hottie Olivia Wilde is actually in this thing? Behold, the second full trailer for Jon Favreau's Cowboys & Aliens, packed with more (partial) alien peeks, more action, naked Olivia Wilde AND shirtless Daniel Craig! Yes, there's something for everyone.

It begins with footage we've seen before, with minor adjustments; after handily dispatching his foes in the barroom scene, amnesiac alien bracelet-wearer Jake Lonergan (Daniel Craig) is knocked out from behind - by Olivia Wilde! She needs to know where he came from. It might have something to do with the townsfolk who have been kidnapped who are now revealed to be chained up somewhere by those strange alien bolo-chains.

Later on, Wilde wanders through a crowded campfire gathering with no clothes on -- and in this trailer, Favreau shows that he's equal-opportunity when it comes to nudity. Ladies and gents, enjoy the new Wet & Shirtless Daniel Craig shot. Oh, right. Indiana Jones is also here, somewhere.

The vibe in this trailer is energetic, fast-paced, tongue-in-cheek, even - and if the rollicking music heard here is any indication of the final film, Cowboys & Aliens could have a very mainstream-friendly, Pirates of the Caribbean-type appeal. Additional glimpses of a pointy-clawed alien hand and shots of those isopod-like alien ships in action -- grabbing Olivia Wilde from horseback, snatching yo people up! -- give the Cowboys & Aliens marketing campaign a much-needed adrenaline boost, while remaining true to Favreau and Roberto Orci's promise not to reveal the actual alien creatures just yet.

Apple/iTunes has the trailer debut right here (the new trailer made its official premiere during tonight's American Idol), and if you're so inclined, you can take a dip into the Movieline vault for the Superbowl spot and first trailer to compare. Cowboys & Aliens hits theaters July 29.