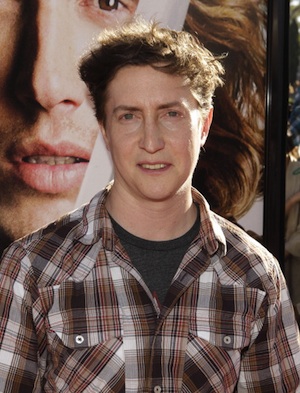 Movieline didn't set out to discuss the finer points of creature genitalia at length with award-winning director David Gordon Green, but standing opposite the filmmaker and a plate of cookies at the tail end of his Your Highness press day, all bets were off. Possessed of a laser focus and a restless energy, Green has carved an eclectic career path for himself ranging from sensitive dramas (George Washington, All the Real Girls) to raunchy comedy (HBO's Eastbound & Down, Pineapple Express). Featuring pedophile gags, stoner jokes, ridiculous medieval accents and the aforementioned Minotaur schlong, Your Highness -- co-written by friend and star Danny McBride -- is decidedly not one of those highbrow affairs.

But seeing how far Your Highness goes in testing the audience's (and critics') threshold for vulgarity and silliness is one of the film's greater pleasures. In the fantasy stoner comedy, McBride plays a spoiled prince forced to become a hero when his smarter, stronger, more popular brother (James Franco) goes questing to save his betrothed (Zooey Deschanel); along the way, they join forces with a feisty warrioress (Natalie Portman) to defeat a terribly ridiculous evil wizard (Justin Theroux). And yes, an enlarged Minotaur member plays a pivotal role in moving the plot along.

Green seems acutely aware that folks might see Your Highness as a strange sort of juvenile departure in a career with serious filmmaker promise (he's got the comedy The Sitter set to open later this year and is planning a remake of Dario Argento's Suspiria to film next year). But, as he tells Movieline, "you just do what you feel like doing and work with people that inspire you, and if you're honest with yourself and you have a good time, keep doing it."

It was surprising to see just how far you guys went in Your Highness. How exactly did you come up with the craziest stuff? Is this what you and Danny do when you hang out together?

The girls, too! We had Natalie and Zooey in there getting raunchy with all of us! You can't blame just the guys.

That was my idea, the Minotaur dick.

And then what Danny does with it! Honestly: Were there... substances involved in the making of this film?

Nope. I found that you can't really be productive when your brain is altered by substances. So in terms of the work day in production, there's too much pressure and stress. You get too distracted. Maybe at the end of the day when you've got a couple of takes left and you know you'll be home soon. But it's not a productive attribute. Maybe when you're writing, too. It could be okay. Because you know you can just pass out and wake up the next day with a clean frame of mind.

You have to sit around a table and think, okay, how big is this dick, and how graphic is this going to be? Is he going to be circumcised? All of these conversations. And you want to make it look realistic, so you have to hire the best company.

So we hired Spectral Motion, who does a lot of Guillermo del Toro's creature design. So it is a very thought out and elaborate process. And then you have all these logistics you line up and you've got to be funny on top of it. It's me having to keep an eye on the background and the foreground a lot and it's a juggling act, but I would credit the actors for a lot; certainly the script is hilarious that Danny and Ben [Best] wrote, but then the actors bring a lot to the table in terms of ideas and improvisation.

How did improvisation come into play on set?

After we've shot a couple of takes close to script, we like to break the rules and throw it out the door and try some new things. Ideas like turning the Wise Wizard into a pedophile was just James and Danny riffing, because it was kind of boring when we were just sitting there talking to this little Yoda thing. He was just giving exposition. So we were like, well, how else could we add a layer to this? So they came up with that.

Your Highness references many a fantasy film that's come before it -- what were some influences or films you had specifically in mind?

I think movies like Lord of the Rings and Harry Potter have opened up a subculture to the foreground of culture to be a part of the common vernacular. Of sword and sorcery movies, of fantasy films, of creatures and worlds of adventure -- we all now accept that very blindly, because of the success of those films and the Star Wars films, the Indiana Jones films. But these films find their genesis in B-movies. If you're Indiana Jones it's B-movie serials. For us, in terms of making Your Highness and our version of a Lord of the Rings movie, our inspiration came from these late-'70s, early-'80s raunchy, low budget sword and sorcery films: Hawk the Slayer, The Sword and the Sorcerer, Krull, The Beastmaster, Deathstalker and Barbarian Queen -- all these movies that were, at the time, not really the movies of massive commercial success or acclaim but something that lived in our hearts and really struck a chord with our imagination.

I watched a lot of those films in one sitting a few years ago at the New Beverly Cinema.

When they did Deathstalker II? I was there for that! Sword and the Sorcerer, Deathstalker II, and Barbarian Queen! [Conan the Barbarian and Yor, the Hunter from the Future rounded out the five-film marathon.]

Aha! It all makes sense. Now with Your Highness, you're also blending in the stoner comedy subgenre.

We're marrying a lot of kinds of movies. There's a love story, romance, adventure, quest, medieval, fantasy, science fiction, and comedy... and the stoner movie. In my head it's not a stoner movie, it's a stoners' movie. Because there's a little bit of weed smoking in it but it's not like you can really hang your hat on it. It's just more of a movie, I think, for a mentality of somebody that likes to open their mind a little bit and have a good time at the movies. They'll enjoy this movie. But then, so will my grandma! I'm not really particular in categorizing it because it does have an epic love story and a great scope of adventure and really unique creatures and spectacle of magical and fantastic elements -- and there are two moons in this film, so you can kind of get away with anything.

Early on you wanted to use stop-motion animation in the film, but you ended up going with CG effects. What other kinds of compromises did you have to make along the way?

Well, there were no compromises -- I'd say there was education I had to have. Because I wanted it to pay homage to a lot of these movies, Clash of the Titans and whatnot, and stop-motion became a very specific thing the more I got educated on it. Because it is tremendously expensive. I thought that would be a shortcut to make the movie less expensive, but it's tremendously expensive, incredibly time-consuming, and once it's shot you can't change it. So in terms of the movie that we were preparing to make, which was on a very limited financial budget and a limited schedule, as interesting as it would have been to take that traditional route in terms of stop-motion, we worked with this company, Frame Store, to kind of simulate stop-motion within a computer -- to kind of have the same strobe-y effect and the imperfections of stop-motion within our character Simon, the mechanical bird, but without some of the lack of insurance that actual stop-motion would have entailed.

Were there any particular props that you really wanted to hang onto after the shoot?

All of them, and they haven't sent them to me! I have a ton of them.

I was envisioning that Minotaur dick up on your mantelpiece at home.

Danny has that. I put it in a glass c
ase and gave it to Danny as a wrap gift. James got me the Blade of Unicorn with an engraving on it that said "Our fearless leader," which I thought was really sweet. So I have that mounted. I have Simon the bird. But there are a lot of weird props that you wouldn't even notice from the movie that I just want in my house.

Over at IMDB, the first and only keyword listed is "thong bikini," thanks to Natalie Portman.

"Thong bikini." I guess people liked that. Go, Natalie! She's got a cool butt. She was game, she was ready to show it.

You go way back with your other lead actress, Zooey Deschanel, who starred in All the Real Girls. Was it easy to get her onboard for Your Highness? Did you just call her up and say, "I'd love for you to play this part?"

Yeah! We made All the Real Girls and had a really good time. I worked with her in a dramatic role in that film and I'm very proud of the performance she gave -- hopefully she is, too -- and it was a really wonderful production. It was the first time Danny had acted. A very family-like atmosphere and a lot of the same key crew worked on this movie. So I was like, "Hey, guess what? They're giving us more than, like, a million dollars to make this movie. They're giving us money to have wizards and shit and creatures running around, so don't you want to be the damsel in distress?" You know, you pitch it to them as a fun process and so many actors, you get stuck in a trailer and get entouraged and paparrazi-ed and things like that, and they just want to go have fun and let loose. People take themselves very seriously but even if I'm making serious drama I don't take anything too seriously. I think you've got to be appropriate to the material and then find a way to energize yourself, and a lot of that comes through humor and deconstructing the taboos of either relationships or, in the case of this movie, vulgarity and such.

Looking at your career so far, you've taken a fairly unorthodox route in your film choices. Would you recommend other filmmakers follow suit?

That's the beauty of this business; it's not like there's a ladder you have to climb, there's not a chain of command you've got to adhere to. You just do what you feel like doing and work with people that inspire you, and if you're honest with yourself and you have a good time, keep doing it.

Universal has put its faith in a run of ambitious fantasy films in recent years. What was your experience working with them, and what kind of budget did you have to work with?

Basically, they gave us a comedy budget. You know, this movie costs less than most Adam Sandler movies cost, and we're sitting here trying to talk about the epic, adventurous nature of the movie -- I think we got a lot of bang for our buck in trying to make it seem like it cost three or four times what it cost. I mean, you never have enough time and you never have enough money to make the movie you want to make, and then you've got to get creative. But that's not their fault; that's the laws of gravity. They were wonderful. They were encouraging of us to make a balls-out movie that took a lot of chances. They're marketing it -- they let us f*cking lock picture on the craziest movie ever made!