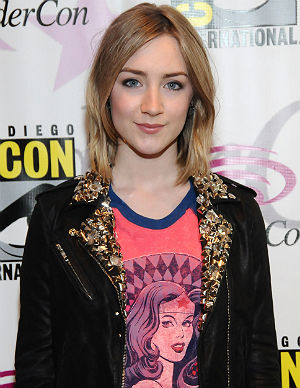 Sixteen-year-old Saoirse Ronan earns her action star stripes this week as the titular assassin of Joe Wright's thriller Hanna, a hyper-charged, globe-trotting fairytale about a feral teen sent out into the world on a mission of vengeance. With an infectious score by the Chemical Brothers to punctuate her journey, Ronan fights through droves of enemies with a fierce precision that belies her youth and petite stature -- and, as Hanna discovers friendship for the first time in her life, so too does Ronan convey a blend of preternatural maturity and childlike naiveté rarely found in performers her age.

Movieline caught up with Ronan in San Francisco at WonderCon, where she appeared with director Wright (who previously directed her to an Oscar-nomination in 2007's Atonement), to discuss Hanna, her rumored involvement in The Hobbit, her upcoming assassin black comedy Violet and Daisy, and more.

What were the most useful skills you learned in order to play Hanna -- your tips for becoming a teenage assassin?

Learn how to use a knife and how to punch. Not a steak knife, but [makes slashing motion] those kinds of knives. You can practice on Eric Bana. I'll lend him to you. [Laughs]

Why was the knife such a favorite of yours?

I enjoyed it more than anything else. It's not cool, but having a weapon in your hand and doing all these swipes is quite elegant, I think. So I really enjoyed it -- it was almost like painting. Like brushstrokes. So that was the reason I enjoyed it, because of the motion of the swipes. Also, don't let anyone know what you're thinking.

That's a key part of Hanna's psyche, isn't it? We see her take in the world through fresh eyes, but she's been taught to mask her thoughts from everyone.

She has to, because no one can really know her true identity. She's taught to speak this spiel to everyone that she meets, but it's a complete lie. I think I just felt like it was perfect for this character, well suited for her, for her to be understated and quite unassuming. Just really naïve and innocent. She's not quite aware of how to react to anything.

Including her only friend, played by Jessica Barden. The two of you share an innocent kiss -- why did you suggest that moment during the scene?

I thought it was quite fitting for Hanna to have a physical connection with someone who she cares about. Sophie is someone who she doesn't have anything in common with, and really they're both opposites. One is what no one is, really, and one is what so many young teenagers are now, and for these two forces to come together and develop a very intimate relationship... and it's not a sexual sort of romance, but it's quite a lovely friendship. And that's what girls do. It's innocent, and I thought it was kind of perfect for the scene.

In regards to rumors of you joining the cast of The Hobbit, how far have talks progressed?

Well, nothing's been confirmed yet. I know that they are introducing a lot of characters into the film, but I can't really talk about it yet, unfortunately. But I'd love to work with them, and they've said in the past that they'd like to work with me again too, so it would be nice if something worked out.

Your name had been associated with Tarsem's Snow White project until recently. Were there actual talks of you joining that project?

No, I mean I had read the script but I'm sure plenty of girls had. It was a thing that was circulating around, but nothing was official.

But you did film Violet and Daisy?

Yes, I actually shot that last year. I can't wait!

And in that you play another assassin.

Yeah! It's about these two best friends called Violet and Daisy who are young women assassins, and they go on this job to kill James Gandolfini's character Michael, in order to buy a dress that their teen pop idol has just brought out. So as you can tell just from that, it's not like Hanna at all. It's a black comedy and it's not an action film. It's just bizarre; they live in their own little world and don't really mix with anyone else, and their relationship gets tested as they start to get to know this guy that they're supposed to kill. So it's quite wonderful and it was fantastic the way it was written.

Did you film that before or after Hanna, and did your Hanna training help lend anything to your Violet and Daisy character?

After. Besides the handling of a gun, not really. That was kind of it. We didn't have any fight scenes, really -- just me shooting a gun.

You've certainly amassed a number of bad ass skills for a person your age.

You're right, actually! I mean, for Hanna I learned bamboo stick fighting, archery, I learned how to use a knife, a gun, martial arts...

In light of comparisons to Sucker Punch, what do you think makes Hanna an empowering figure for young women?

In my opinion, the reason that Hanna is so empowering is because she is a young girl who is not in sexy clothing and is not sexy, really, in any way. She's a bit of a misfit, especially when she steps out into the world, and is quite confused and fascinated at the same time by everything that she sees. And suddenly she turns into an animal, because these people that she's fighting -- every single one of them threatens the person that she loves, which is her father. The only world she knows. And although it is violent in some places, it's all motivated by love. That's quite wonderful, I think.

Hanna is in theaters April 8.