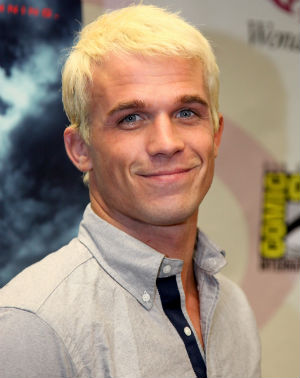 Three years after he shot to fame by terrorizing Kristen Stewart and Robert Pattinson in Twilight, Cam Gigandet finds himself once again in a vampire flick -- only this time the bloodsuckers are really nasty, and Gigandet is one of the good guys. As a young sheriff in the upcoming Priest, Gigandet plays foil to Paul Bettany's Jedi-like warrior, both searching for a missing girl in the vampire-infested wasteland. Gigandet met with Movieline to discuss Priest and more after he and his fellow filmmakers debuted first look 3-D footage from the film at WonderCon.

Your last few projects have been very different -- a horror film, a comedy, a musical. Have you developed a strategy in the roles you choose, or do you just take them as they come?

There's some thought. I feel like at least right now I'm playing more of a reactive role in my career. I don't actually go out and pursue a route that will fit me best, it's just that something comes to me and I enjoy it and want to be a part of it. When Priest came along I had just shot movies where I was a guy who had answers and who was always secure with himself. But when Priest came along and I saw that in the beginning of the movie he's a guy who doesn't have all the answers, and hasn't reached his full level of maturity and manhood, and I love that journey -- of him becoming a man.

Paul's character, on the flip side, seems to be the one with all the answers. What's the relationship between you two in the film?

Well it's exactly that. He is the one with all of the answers, the skill, and the experience. Obviously I'm learning from him but the dichotomy, I guess, is that I had brought him in; this is the journey that I'm taking to rescue my girlfriend. So I enlist Priest's help. And along the way our roles reverse; originally, I thought that I'd be the leader of this little journey and that quickly changes. Though we kind of butt heads in the beginning, my character is just not willing to accept that role. But he understands that Priest knows way more than my character ever would.

So in any normal Western, your character might be that guy.

Yes, and that's what his life was like. Out in the middle of nowhere, away from that protected Church area, he was the sheriff; he was the man in town. He realizes that he was very out of his league.

Priest brings you back into the Sony/Screen Gems fold once again, working with [Screen Gems president] Clint Culpepper -- who made quite the impact at the WonderCon footage screening, shouting his support from the audience.

He's a character, and a genius. He's a huge fan. An actual studio head sitting there amongst the fans, screaming at the top of his lungs.

How did you come to develop such a close working relationship with him? You've worked together a lot in the past few years.

We've worked together many times. I don't know why Clint keeps hiring me, but he does and I am eternally grateful. Even when we first met I believe I was 45 minutes late for a meeting. Me and my fiancée at the time were having a baby and I had my ultrasound, so I'm carrying this ultrasound the first time we're meeting, I'm late, I'm sweating all over the place, he's talking to me, and I had no idea who he was at first. I was like, "I'm sorry, I can't talk -- I'm late for a meeting!" Then I realized it was Clint Culpepper, and he was like, "Come on in!" And ever since it's kind of been that kind of relationship. It's never been pressured, it's never been business. We're just there because we love working with each other.

Which film were you meeting for way back then?

Let's see... it was The Roommate. I shot The Roommate first, and then Easy A, and then Priest, and then Burlesque, all over the course of about a year. I would even go from my Priest wardrobe, in all my leather and dirt, and I would go over to the Burlesque stage and have my eye make-up put on.

It seems like Clint is emulating the old studio system at Screen Gems, in a way, calling on a stable of actors and filmmakers for project after project.

That's kind of who Clint is, which is so great. He's like a modern olden-day studio head. It's just about because he loves doing it and loves believing in people and taking risks, and it's not so much about, "Let's make money! We're in a business to make money!"

You were only in the first Twilight film, but that franchise's fandom is a loyal bunch. How much has your Twilight fame followed you as you've carved out a career in the years since?

It's still and forever will be the thing that got me off the ground in the first place. I had jobs before that, but that was the one that got me everything since. So I will be grateful for that movie and the fans -- the fans are growing up now, so it's kind of like we're all doing this together. What's so crazy is that I think I'm so far removed from Twilight now that I can actually watch them and enjoy them.

A few months ago you filmed Trespass with Joel Schumacher and the two Nics - Nicolas Cage and Nicole Kidman. What was that experience like?

That was quite the experience. I've been so lucky to have such a variety of different jobs, and this one was no different. Even the way we shot it, in Shreveport, Louisiana... there are literally seven people in this movie and we're in this one house throughout the entire filming of the movie. You have four cameras on seven people in a scene, literally going through the whole movie. It got very complicated. There were times when cameras were bumping into each other, and we were all trying to work around them. It was fun.

We know that Trespass is about a couple, played by Nic and Nicole, who are held for ransom in their own home. How does your character fit into the plot?

It's basically about this group of people -- there are four of us -- who go and rob this rich family, the two Nics and their daughter. [SPOILER] So we go to their house and rob them, and it turns out that I'm actually in love with Nicole Kidman's character, which wasn't hard to do. [END SPOILERS] It's a nice day at the office.