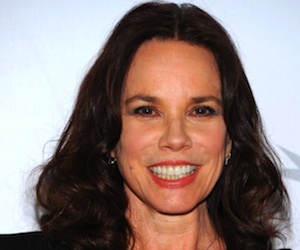 It was with no small amount of eagerness that Movieline ventured to the Magic Castle in Los Angeles to meet with screen veteran Barbara Hershey and discuss her work in Insidious, her second horror film in the last four months, following December's Black Swan. There, ensconced in a room in the famed nightclub -- a place purposefully shrouded in mystery -- conversation turned from the James Wan-directed tale to the paranormal and beyond thanks to a series of eerie mystery noises that, fittingly enough, evoked the thrills and scares found in the haunted house chiller.

Insidious casts Hershey, once again, as the horror movie mother, although her role couldn't be farther from the deliciously enigmatic stage mom who kept Natalie Portman's prima ballerina under lock and key with her unique program of self-doubt, smothering adoration, and mandatory fingernail clippings. Here Hershey is Lorraine, the gentle, loving mother who raised Patrick Wilson and now offers her help when his and Rose Byrne's young son falls into a supernaturally-induced coma.

What follows is a mish-mash of horror movie tropes involving ghost tales, astral projection, demons, and more, but alas, it's difficult to discuss a film like Insidious without delving into spoilers. Black Swan, on the other hand, is ripe for examination. Read on as Hershey discusses the appeal of joining a project like Insidious, waxes nostalgic on her long and varied career, and reveals the truth about the curious, ambiguous, and unsettling relationship between her character and Natalie Portman's character in Black Swan.

Insidious is a small, scaled-down horror film. How did they get you on board?

It has a good cast, really good actors. I got the script through my managers and agents, read it and liked it, and knew that at that point Patrick [Wilson] and Rose [Byrne] were involved.

[A rattling noise interrupts us from the back of the empty room.]

Everybody's so jumpy in this place, it's funny. [Laughs] We're being observed at the moment.

It would be appropriate, given the film's subject matter.

Isn't that funny? So... I heard that James [Wan] was really talented. I hadn't seen his films, but when I met him I really loved him and thought he was great, a great spirit. Also, I had just done Black Swan and really wanted to play a different kind of character. So there were all these reasons to do it.

Speaking of these spooky noises, do you believe in ghosts or the supernatural?

I believe in paranormal things. I believe there are a lot of charlatans out there with explanations that aren't accurate, too, but I think there's probably a lot going on. I've experienced a few things that I have no explanation for. You know, I like all that. I think it's kind of egotistical to think we know everything, and I love the big unknown. So it appeals to me a lot.

The paranormal experiences you've had, can you describe them?

You know, they're kind of long and involved, so it would take too much of your time...

[Another sound is heard across the room -- this time a plunking, faint noise against a wall.]

There's some water over there, is what I'm hearing. Isn't that funny?

Details notwithstanding, having those real brushes with the paranormal must have given you unique insight into your character. Do you feel that this gives you a certain openness as an actor?

Yes, and to play the part in this kind of movie that's definitely an advantage. I don't have to break down barriers to play a part like this.

You've had such a long and varied career, worked with many fine actors and directors, and gone through different stages as an actor. How do you approach transitional periods in your career?

Transitions are easier to identify in retrospect than when they're happening to you, and certainly in terms of career because you never know. It's such a strange career, in terms of never knowing what's behind the door in front of you, or whether it's going to be a year from now. You just never know anything. So it's only with retrospect that I can ever kind of think, "Oh, that was a good period," or, "Oh, that was a dry period."

Folks point to The Stunt Man as perhaps the first pivotal point in your career. How do you look back on that time now?

That was, but again I didn't know it at the time. She's an ingénue character but it was a sort of a transition to womens' roles. I've always looked younger than my years, so in my 20s I played teenagers, in my 30s I played 20s, and onward. So I'd played young women for a long time before I had a chance to play a woman. And I think The Stunt Man was sort of the beginning of that.

What other moments do you consider particularly significant in terms of your career - moments that fundamentally affected you?

Well sure, Hannah and Her Sisters. And there was a film I did around that time called Tin Men that not many people have seen, with Danny DeVito and Richard Dreyfuss, that I love. The Last Temptation of Christ meant a lot to me personally. There have been quite a few. A World Apart, which I won Best Actress for at Cannes. You know, everything changes you. I guess what they are, are opportunities to explore yourself as an actor, that you don't get when you don't have a great role to do it with. You're really dependent as an actor. A painter can paint a painting, a musician can play music, but with an actor it all has to do with opportunity -- the chance to play a part. The challenge of that is that it does show the world what you can do but it also shows you what you can do, what you innately felt you could do but you never had the chance to know if you could. So when you get those chances they mean a lot, and they all affect you, they're all opening doors inside yourself.

I've always loved the idea that acting is a uniquely experiential craft.

It absolutely is. It's this rarefied chance, I've often felt, to explore inside yourself, aspects of yourself, but in humanity. If I play someone very far from myself and open that door in me, first of all I'm changed, but I'll never feel the same about that kind of person as I felt before, because I've had this experience of getting to feel what it feels like. And you know, when you do something that's period it's very overt, because it's like experiencing history on the inside. So it's an amazing chance, an opportunity, that actors have, not only to explore yourself, but to explore mankind. It's a real honor on that level.

Which areas do you feel you have yet to explore that you would like to?

You know, it's never ending. I've always been kind of maddeningly general because all I've ever said was that my ambition for myself was variety. And that means the types of movies and the types of characters.

Going from a film like Black Swan to Insidious you were moving within one genre, in a way, but the experience shooting each of them must have been wildly different.

They're both scary. But they were very different! Black Swan is pure psychological, in that it's watching someone go crazy -- and the character I played was someone who was also crazy. And Insidious is much more of a classic horror film, with something happening outside the characters and they're normal people that this extraordinary thing is happening to... versus abnormal people in Black Swan.

When Black Swan first started screening, viewers began picking it apart, analyzing every clue, raising questions that still remain unanswered today. Is that something you enjoyed watching from the other side of the curtain, knowing what you know about the characters?

Well, what fascinated me about it was the variety of reactions. There's a saying that when people look at a painting, the painting's looking at them; I think it's really true in any art form. When it becomes art, you really do experience it on a subjective level. And that fascinated me, all the different reactions that people had. I also thought the ending was very satisfying; often, open-ended films can be unsatisfying to me, because they leave too much in the open. I don't have closure. But this one had such closure, and it had an honest ending, I felt. Yet it's so open in terms of interpretation.

Absolutely! When I think of the ending I go to your reaction shot as Nina's mother in the audience. It's the clincher. It seals so muc
h, in terms of what your character realizes is happening on stage.

My character is the only one who knows what's going on.

Exactly. And while that's fairly clear, there were a number of fans who read into Nina's relationship with her mother a note of sexual abuse, among other theories.

When it comes to theories like that, do you choose to remain mum?

Oh, it's not a question of keeping mum -- I think we also had our own interpretations that we didn't disclose to each other. I had definite secrets about my character that I shared with Darren [Aronofsky] but didn't share with Natalie. I'm sure we all did. I remember in the scene where Natalie and Mila [Kunis] come back drunk, I said to Darren, "Do I see Mila's character?" And he said, "I don't know!" [Laughs] So I had to make my own decision.

Insidious is in theaters today.