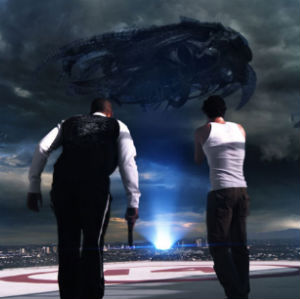 Yesterday was Thursday, when it seems the folks at Sony were in such a good mood that they dismissed their complaints of breach of contract against the Strause brothers, VFX experts and makers of last November's indie alien invasion pic Skyline. The strongly worded charges originally accused the Strauses' Hydraulx Entertainment of using Battle: Los Angeles equipment to make their own competing sci-fi flick, but you know what helps smooth over disputes like this? Discovering that Skyline's effects were completely different from those in Battle: Los Angeles. Also: Having $35 million in your pocket.

It's worth pointing out that Sony dropped its complaints days before Skyline is set to street on DVD and Blu-ray on March 22 -- perhaps a goodwill gesture of sorts to clear Skyline's good name once and for all as it approaches its second life on home video. But it's hard not to think the timing had something to do with the sigh of relief that came after Sony's big-budget alien pic opened strongly at #1 seemingly unmolested by competition from Skyline, which came and went four months ago.

Sony, back in August: "We demand you stop breaching your visual effects agreement."

Sony, this week: "Our bad, fellas! Let's just forget about this whole thing -- and hey, great job on those Battle: Los Angeles effects!"

Everyone made nice all around, as evidenced by the statement released by Greg and Colin Strause following the dismissal of the suit, in which they voiced enthusiasm for working again with Sony in the future. So hurrah, everyone! Greg and Colin, you guys take the front seat and let Sony hop in the back seat. Everyone's looking forward to the weekend, weekend. Play us out, Rebecca Black!