'It Was All Unsaid': Martin Scorsese and Paul Schrader Talk 35 Years of Taxi Driver

No classic film's milestone anniversaries are safe from the reissue spotlight these days, hence the 35th anniversary restoration of Taxi Driver that debuted Thursday night in New York. But at least Sony made it count, reuniting director Martin Scorsese and screenwriter Paul Schrader for their first joint appearance on the film's behalf since it won the Palme D'Or at the Cannes Film Festival three and a half decades ago.

"Marty and I have talked about this film over the years, but the last time we were actually on the same podium together was at Cannes in 1976," Schrader told moderator Kent Jones and a capacity crowd at the Director's Guild Theater in Manhattan. "In the intervening, what, 35 years, I'm sure we have both evolved our own mythology -- which may not, in fact, coincide with each other." Audience laughs. "In which case I would defer to his mythology."

The occasion did settle at least a few outstanding matters, such as the strange, shared understanding that made the disturbed title character Travis Bickle such a resonant character to Scorsese, Schrader and Robert De Niro ("All three of us knew who this guy was," Scorsese explained. "It was all unsaid."), the small ownership stake Brian De Palma has in the film, the attempts get former NYC mayor John Lindsay to play the film's presidential candidate Charles Palantine, and composer Bernard Hermann's initial reluctance to score the film ("I don't do movies about cabbies," he told Scorsese) before succumbing because, in part, "The corn flakes on the brandy -- I love that."

In keeping with the vaguely tech-y spirit of the event, Scorsese also weighed in on the evolution of Taxi Driver's look, which entertained a variety of conceptions and stylizations before ultimately latching on to a certain German filmmaker making waves in mid-'70s New York.

"Well, what it was that we had a lot of trouble pulling the picture together," Scorsese said. "[Co-producers] Michael and Julia Phillips really tried, and the combination of all of us together were finally able to pull it off, but it was pretty low-budget for the time. For a long period of time I was thinking black-and-white, but that would have been too pretentious. I felt we could do a black-and-white video, even, if we couldn't get the money for [film]. We were seeing the latest video films that were being made; David Hemmings had made some, but the quality wasn't quite right at this point. And I said, 'What about the desaturated color I use at the end of the shootout?' Moby-Dick was done that way -- the film that John Huston directed. He devised this color scheme with Oswald Morris in which it would look like whale engravings. In any event, the color was very troublesome to me.

"But [Fassbinder's] The Merchant of Four Seasons... They were showing the West German renaissance pictures at the Carnegie Hall Cinema, and I saw two of them. One, I don't remember what it was, and the other was Merchant of Four Seasons. I've seen his films -- I love Berlin Alexanderplatz, but I don't get a lot of it. It's way over my head, in that sense. The Fassbinder stuff, I just don't get. I watched The Bitter Tears of Petra Von Kant. But the thing about Merchant of Four Seasons was that it had a kind of brutal honesty about the way the camera looked at the characters -- at the actors -- and not necessarily the melodramatic scenes. And it just made me realize that you could do anything, really. Just anything, as long as you feel honest about it. It's an honest image. It's like a police photo -- a crime scene photo. There's a certain objectivity to it. How does a crime scene photographer chose the angle? You know? Does he say, 'This'll be nice...' Or is it, 'There it is! Life, death, right here.' That was the impulse that Fassbinder's stuff gave me."

Jones followed up with a question about the climactic shootout, whose desaturation was a practical choice as much as an aesthetic (and oft-discussed) one -- and not the last Scorsese would face in his long, notorious relationship with onscreen violence.

"Well, the imposing part was to cut the picture for an R," he said. "We were getting an X. [...] I didn't know what else to do. I did have to cut some of the flowing-blood sort of thing. But again -- and that's when I first realized it, too -- some of those things, I'm used to it. I don't want to spoil it for you, but there's a person there with a pump and this little wire. 'Yeah, that looks fine to me. Maybe a little more?' And you don't realize how it looks to other people. Even the beginning of Goodfellas: We had a preview where Joe Pesci takes out a knife and stabs Franck Vincent in the trunk of the car. In the first cut -- at the preview -- we had seven stabs. And it's this big kitchen knife. Even then, after the second thrust, people started to leave. Thelma [Schoonmaker, Scorsese's long-time editor] said, 'I think we have six more.' I said, 'Oh, no! What? We don't need that much. Oh, God!' I mean, _I_know it's a fake knife.

"That's not an excuse, though," Scorsese continued. "I did have to trim frames and that sort of thing, especially with the hand [when Travis points a bloody finger at his head and pretends to fire]. And there's no music over the shootout, which makes it very disturbing. And then, somehow, some way, after lots of arguing and lots of fights, I said, 'Hey, I've got an idea. What if I tone the color down?' Which was just something I pulled out of a hat. Actually I wanted the whole picture to be that way. [...] It took us some doing, but I liked it a lot. It gave it more of a tabloid feel. Maybe ore of the film should have looked that. [Cinematographer] Michael Chapman -- his photography's extraordinary, but he liked it, too, I think." 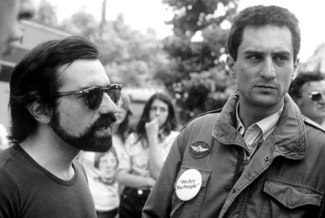 Overall, the restored Taxi Driver doesn't look a whole lot different than the DVD reissues, prints or even the cable versions I've seen over the years -- perhaps more a testament to my undiscriminating eye than an oversold hype job from Sony, though to some extent, Schrader confirmed the consistency from frame one.

"Marty made the decision to restore this to the condition it was when it was first projected at the Beekman in 1976," Schrader said. "And that included a very tattered logo from Columbia Pictures. [Sony Pictures Home Entertainment president] Grover Crisp told me he had pleaded with Marty, 'Please, let us put on a better logo. And Marty said to him, 'That logo was always awful. It should stay awful!'"

The duo closed out with their reflections on the Taxi Driver experience as a whole -- or the lack thereof, anyhow.

"I don't look back at it," Schrader said. "I don't know about you. I just keep moving forward. I'm very gratified and humbled to be lucky enough to be part of a film that continues to resonate and have a life. That's just luck. Serendipity. There's talent involved, but talent alone doesn't necessarily have that effect. I have no real desire to revisit it. I just find -- and I don't know about you, Marty -- but I just see everything I could have done better."

Scorsese nodded. "I know, I know," he said. "No desire to see it again, either. [The same goes for] pretty much any movie I made, unless there's a nice musical sequence. Seriously. Or some of the rock films, or rock documentaries I've made, I'll watch some of that. But also, for me, and I've said this many times: Some times are difficult in life. The films are so personal to me, and I get so involved with the whole process during the editing and all that that sometimes it's hard to revisit that personal time. It has nothing to do with the reaction to the film. [...] Every picture you see of De Niro and me on set, we're talking about something different. Like, 'How did we get into that thing? Who's that guy?'

"We just talked about personal things, and that was part of the process because it cleared our heads. And then you can go right into it. But his extraordin
ary dedication to it... It wasn't even dedication. It was like living it. He was in it. Remarkable."

Taxi Driver's anniversary roll-out launches March 19 and 22 at select AMC theaters (along with a special 35mm engagement at Manhattan's Film Forum), followed April 5 by the film's Blu-ray release -- about which you can read up here.