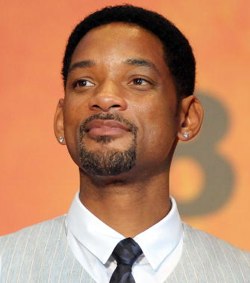 If there's anyone in Hollywood with more rumored projects in the pipeline than notorious development sluts Ridley Scott and Brad Pitt, it would probably have to be Will Smith. A casual browse of the public record yields no fewer than 30 films with Smith linked as a producer, and roughly a third as many claiming he's attached to star. Of course, "attached" historically means little when you get to actors of Smith's profile, magnitude and selectiveness (Men in Black 3, currently in production, is Smith's first movie since his late-2008 effort Seven Pounds), but the buzz for each project swirls nevertheless -- at least until the next rumor, the latest of which appears to have arrived.

That would be Joe, a modern-day adaptation of the biblical story of Job, in which a roundly blessed man's faith in God is tested by the Creator's swift, sudden and catastrophic removal of all he holds dear. Seems perfect (on paper, anyway) for our Tea Party times, just another sure thing that Smith can drive to stratospheric global grosses and/or package around his family, because God indeed knows if there's anything Willow or Jaden Smith needs, it's more work. (For the record, that Smith-produced/Willow-starring version of Annie is not counted against him as an actor.)

Anyway, the point is that Joe has as much of a chance of being made as any of the numerous other movies to which Smith has hitched himself (or to which overzealous producers have hitched him, because why not) over the last three or four years. Which is to say: Little chance. Let's survey the hype and break down the odds:

· The Legend of Cain This one, first reported last summer, blends Bible-tale updating with the hot cinematic trend in... vampires? Whatever: All that matters is that Smith's brother-in-law Caleeb Pinkett co-wrote it and wife Jada Pinkett Smith is (thus?) co-producing, while Smith is set to star in the title role, and Smith's family affairs (see Karate Kid) generally get made. All they need is a studio. Minor details! ODDS: 25 to 1

· The City That Sailed: This is hands-down my favorite Will Smith movie to hear about seemingly every year as though OMG it's really happening this time. Based on a script by Andrew Niccol, the film tracks the story of a street magician and his daughter living on opposite sides of the Atlantic -- him in New York, her in London -- who miss each other so much that Manhattan literally breaks off on a course for England. Whoa! Think Titanic meets 2012, I guess, with "magic candles" (I swear I'm not kidding) where the nude-sketch bonding goes go. Smith was first reported to produce and star in this back in 2009 with his I Am Legend director Francis Lawrence at the helm; a year later new reports surfaced that yes, the pair is serious about this and will a studio pleeaaase give them some damn money already. Willow Smith is not officially attached as the daughter, but I presume they're saving that for the next trade-news go-around, which will arrive in 3... 2... ODDS: 40 to 1

· Untitled I Am Legend Prequel/Sequel: On the one hand, it is just a matter of time before Smith and director Lawrence reteam, and they and Warners have nearly 600 million reasons to figure out a way to franchise this blockbuster. On the other, it was a fairly self-contained adaptation of Richard Matheson's short story in which [SPOILER ALERT] Smith's character blows himself up, which made 2008's prequel-cum-sequel rumors all the more unbelievable. They've since abated as other franchise-y Smith prospects emerge (see below), but again: 600 million reasons. And vampires! If there's anything people love more than Big Willie, it's Big Willie versus vampires. Gentlemen, start your deus de machina! ODDS: 50 to 1

· Independence Day 2 and 3: Unless! Unless it's Big Willie versus aliens. Fox has more than 800 million reasons to want to reconvene Smith and director Roland Emmerich, the latter of whom has Anonymous in the works but will likely be ready for his next project around the time Smith finishes MIB 3. I don't pretend to know the budget politics involved (the most recent rumor has a second and third installment filmed consecutively, which, all things considered equal, sounds about as reasonable as anything else on this list) or if, as was noted back before Emmerich went into development on 2012, he and writing partner Dean Devlin remain unready to dump another two or three years of their lives into this concept. Anyway, what's left to destroy? On second thought, don't answer that. ODDS: 75 to 1

· Hancock 2: This will almost certainly happen -- if/when Smith wants it to happen. Director Peter Berg stated the obvious back in 2009 when assuring a reporter that both he and Smith -- as well as co-star Charlize Theron -- would be back to follow up their $624 million worldwide smash hit about a downmarket superhero. Then Berg went off to do Battleship and Smith tended to a different franchise altogether, setting development back by at least a couple years. I don't foresee Smith doing back-to-back blockbuster sequels (especially after it took nearly a decade just to get him on the MIB tip), but the guy's not getting any younger, either. ODDS: 75 to 1

· Uptown Saturday Night: This is one of those projects where you can't decide whether it should be fast-tracked or smothered in the crib: A remake of the 1974 Bill Cosby/Sidney Poitier comedy about a pair of estranged friends attempting to reclaim their stolen wallets -- one of which contains a winning lottery ticket. Smith's production company has owned the rights to this one for nigh on a decade, and its slow development has yielded no fewer than two scripts. The rub here is that Smith's most recent rumored co-star was Denzel Washington, who affirmed a little over a year ago that he was "working on some sort of comedy -- maybe with an action bent -- with Will Smith." So! That's basically where that stands. The starpower upside is obvious, but it comes with a commensurate budget downside; these aren't exactly guys who play around with their quotes, and even at a PG-13, we have very recent, compelling evidence to not overspend on your A-list comedy. We'll see... ODDS: 100 to 1

· The Last Pharaoh: This one predates The City That Sailed on the Will Smith Passion Project Speculometer, but slid quickly from view once writer-director Randall Wallace dug into Secretariat and Smith wound up glued to half the remaining projects in Hollywood. Smith reportedly had long coveted the title role, Taharqa, "the pharaoh who battled Assyrian invaders in ancient Egypt," and even brought the project to Wallace personally. A lot of good that did. It looks like it will ultimately end up a casualty of Smith's attention span, but you never know! Egypt's hot these days! ODDS: 200 to 1

· Hood: This one has the compounded disadvantage of being a modern-day Robin Hood adaptation being de
veloped by the Wachowski Brothers -- not exactly a team known to rush their films into production. Moreover, it's set up at Warner Bros., which, after taking a bath on the brothers' Speed Racer and witnessing from a distance the megabudget misadventure that was Ridley Scott's own Robin Hood, might hesitate to let this one go ahead without a partner shouldering some risk. None appear to have come forth. Meanwhile, the Wachowski's remain hunkered down with their top secret Iraq tale while Smith hammers out MIB 3. Don't hold your breath. ODDS: 400 to 1.

· My Wife Hates Your Wife: A five-year-old project about "two couples who do everything together until the ladies feud and the guys must sneak around to continue their now-illicit friendship." Uh, no. You're likelier now to see Uptown Saturday Night. ODDS: 700 to 1

· It Takes a Thief: Remember this one? A big-screen adaptation of the late-'60s TV show that starred Robert Wagner as a smooth criminal blackmailed by the feds into serving his country, featuring Smith in the lead role? Me neither. ODDS: 1,000 to 1

· Bad Boys 3 They've been talking about this forever, with a new script apparently on the way two years ago and Martin Lawrence brilliantly saying last spring: "Any time you can get Big Willie to come out and talk about doing a third installment of a hot movie like Bad Boys, you have to take notice. I met with Michael Bay, and he said he's onboard too -- so it's real. [...] We're just waiting on Jerry Bruckheimer to let us know when it's really real." Mm-hmm. Did I mention Smith's not getting any younger? He'll play a U.S. president in two ID4 sequels before he makes so much as a cameo in Bad Boys 3. This has reboot written all over it. Big Momma: Bad Boys? Or something. ODDS: Never.