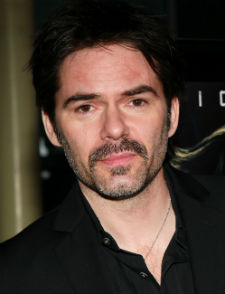 Twilight fans who flock to see Drive Angry 3D this weekend in support of Billy Burke are in for a bit of a surprise, as the actor -- who plays the calm, mustachioed father to Kristen Stewart's Bella in Summit's Twilight Saga films -- swaggers his way through the South as a sexually-charged Satanic cult leader. To put it plainly, Burke's Jim Jones-meets-Jim Morrison villain gives co-star Nicolas Cage a run for his money in the anti-subtlety department, and Burke clearly relished every second of the departure from Charlie Swan.

Movieline spoke with Burke in Los Angeles about his "tasty" turn as Jonah King, a Satan-worshipper so evil that Nic Cage has to claw his way out of hell just to find him, his experience filming Drive Angry and Breaking Dawn in Louisiana, and his reunion with Catherine Hardwicke for the upcoming Red Riding Hood. And while Burke tried his best to play Movieline's My Favorite Scene, can you blame him for having trouble picking just one moment from his favorite film of all-time?

It's fun to see you go from playing a no-nonsense cop dad in The Twilight Saga to this off-the-wall cult leader in Drive Angry 3D. Were you looking for a departure from Charlie Swan?

I wouldn't say that I was seeking it out, but I can say that when I read it I would have done anything that I could to work my way into the movie in any capacity. [Jonah King] was the character they approached me with, and it had been a long time since I had not only not played Charlie, but... in the first part of my career I did a lot of bad guys, and most of them were not very well-written. This guy was so well-written and so tasty and had so many places to go that I couldn't wait to get my hands on it and see what we could create.

Jonah is an enigmatic cult leader with more than a bit of swagger to him. What influences and inspirations did you draw on to create him?

I immediately went to Jim Jones, because he was the guy who jumped to mind when I thought of cult leaders. I grew up in the late '70s and '80s and I remember that whole thing going on, remember seeing Jonestown footage and remember that guy so clearly. So I wanted to take some flavor from that. But Jim Jones was kind of an effeminate nerd, and I didn't want to hit any of that on the nose, but I wanted to give a nod to the sexual ambiguity of it all. That's when the rock star flavor came in, too. I looked at some rock stars like Jim Morrison, Mick Jagger, and steal some pages out of their books as well to make that flair come out. Basically, I just made it up as I went along and put all that sh*t in a blender, and hoped the best came out.

And that evil, honey-dripper accent?

The movie does take place in a bit of a travel across the South, and it is a little bit otherworldly, so I wanted to keep that kind of dirty Southern, almost gunslinger flavor. That wasn't in the script or anything, that's what I came in with. And Patrick [Lussier] agreed with me.

You grew up watching Nic Cage perform; how fun was it to get to go head-to-head with him on a set like this?

I can't think of many professions where there are such tangible and visible heroes, you know? And it's not like if you dream about being, let's say, a fireman, that you actually get to one day work with your specific hero fireman. I've gotten an opportunity to work with a lot of the people I've looked up to over the years, and I feel pretty grateful for it.

I'm fairly sure you don't get this that much considering your other high-profile projects, but I rather enjoy Rizzoli & Isles.

Really? Okay! No, people do mention it all the time. I have a great time working on that show, I love those girls. And that entire set -- the creators and the producers of that show are really great people. If I get the opportunity to go back this season I may do more.

Bouncing around between such different projects -- film, TV, franchises -- have you managed to create a sense of family like you seem to have with the Twilight cast?

With the Twilight gig, I don't know -- it's a strange thing, there's nothing I can really liken it to. It's comfortable. It's nice to see familiar faces and go back and hang with whatever you want to call it -- that family -- again. It's nice.

Between Drive Angry 3D and Breaking Dawn, you've been spending a lot of time in Louisiana.

A lot of stuff has been shooting there. I've gotten to know Shreveport very well.

Ah, yes. I've heard a little something about the riverboats down there.

Taylor Handley said he left some money on those riverboat casinos...

Yeah. They have some gambling boats down there. [Pause] I've been known to frequent them a couple of times as well.

Red Riding Hood is another one of your projects that has links to Twilight -- it reunites you with Catherine Hardwicke. How did you come to work with her again?

I can't speak for her, but she did call me personally and sort of pitch me the idea, and I was immediately down for it. I've always had a special affinity for Catherine and the chance to do another completely different project with her was totally cool. I play a lowly woodcutter. [Laughs] It's set in a Red Riding Hood-type village, you see. I also happen to be Red Riding Hood's dad.

Ah. You and dads!

I know, because I'm the dad to all the ingénues in Hollywood now. It's nuts!

We'd love to play a game with you called My Favorite Scene, in which you pick a scene from any movie that's always stayed with you for some reason.

One particular scene... God, there are thousands of them! Let's go to my favorite movie, which is Willy Wonka & the Chocolate Factory. You can pick any scene from that movie and it's going to be one of my favorites. But what's the one moment? It's not the elevator scene. God, Gene Wilder is so brilliant in that movie, and he's such a smart ass. God, I don't know. Can I get back to you on that?