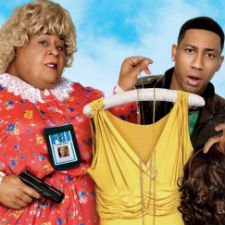 We knew this day was coming: The day when Martin Lawrence's latest fat-suited outing, Big Mommas: Like Father, Like Son, would cause global hysteria with its daring exploration of transgender issues, father-son dynamics, and the plus-size mystique. But not everyone managed their expectations like Movieline's own Michelle Orange; our critical colleagues (especially those across the pond in the U.K., where Big Mommas opened earlier this week) were not so forgiving. Behold, the nine most scornful take-downs of what just might be the worst-reviewed movie of the year:

9. "The best thing you can say about Big Mommas: Like Father, Like Son is that at least it's not as bad as Big Momma's House 2." -- Matthew Turner, ViewLondon

8. "If only men really knew what women get up to! John Whitesell doesn't so much direct the movie as throw a juvenile cinematic tantrum, yet one that -- in the most bizarrely self-contradictory way -- believes it is demonstrating a worldly wisdom about revealing secrets of womanhood to which only he is privy. I wonder if Whitesell has actually ever met a woman." -- MaryAnn Johanson, Flick Filosopher

7. "Any way you slice it, Big Mommas: Like Father, Like Son deserves jeremiads declaring it as the latest in a long line of signs of the ever-looming cultural apocalypse. It is impossible to overstate this film's terribleness." -- Simon Abrams, Slant Magazine

5. "Without this [Charmaine/Trent] character, we wouldn't have the line, 'Yo, this is some Nazi German schnizzle!' A retort blurted out by a peripheral character in response to Malcolm's parental intensity. I'm pretty sure that's some type of hate crime." -- Brian Orndorf, BrianOrndorf.com

4. "Only one knee to the crotch? Only one scene featuring nearly naked chub-rolls spilling out from Big Momma's big costume? Only one inadvertently homosexualized game of fat Twister? What gives, Big Momma?" -- Dave White, Movies.com

3. "While sitting through this embarrassing piece of sh*t, I almost contemplated drowning myself in the toilets of the Savoy by repeatedly flushing my head under the bowl until the pain went away." -- Mike Sheridan, Entertainment.ie

1. "This sequel to Big Momma's House and Big Momma's House 2 is a rancid, unwatchable load, devoid of mirth and joy, and an enemy to all that is good... If you love the sloppy, unfunny slapstick of the Big Momma's House movies but always wished they were more like deleted scenes from High School Musical, this is definitely the movie that you should ask your caretaker to let you see the next time you're permitted to leave the group home." -- Eric D. Snider, Cinematical

The real question: Can Big Mommas sustain its current 4 percent rating over at Rotten Tomatoes, or will it climb its way out of the depths and leave the current crown to Season of the Witch? Cast your predictions below.