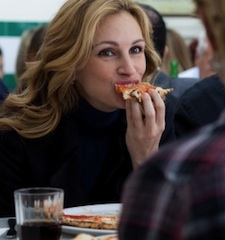 If you've read a celebrity profile about an ingenue in the last few years -- or even few weeks -- the chances are good that you've seen some variation on this introduction: "[Insert starlet here] loves breakfast so much that when I met her for an interview, she was already chowing down on [insert unexpected food here]." Well, courtesy of film publicist Jeremy Walker, there's finally a term for this ever-present cliché: DIPE.

As Walker tells the New York Times, DIPE stands for Documented Instance of Public Eating, a tactic which may be done by an actress to show that she's really "down home," doesn't have an eating disorder or -- gasp! -- just actually likes eating normal foods. Or, maybe not.

Ultimately, the DIPE is meant to convey the impression that a starlet is relaxed, approachable and game, but it's hard to tell whether the strategy really works anymore. Anna Holmes, a founding (and former) editor of Jezebel, a culture-deconstructing Web site that singles out women, casts a cold eye on such moments of documented feasting. "I'm usually pretty cynical about it," she said. "When the writer has made special mention of what the actress is eating, especially if it's something incredibly high-calorie or fattening, I do roll my eyes. Because I assume that it's planted."

Holmes goes on to say that she would rather an actress admit that she has to stay a certain size because of her career obligations, but sometimes allow herself to "splurge." Sadly, the french fries that have been used to great effect in interviews by Lynn Hirschberg could not be reached for comment on this matter.

· For Actressess, Is a Big Appetite Part of the Show? [NYT]