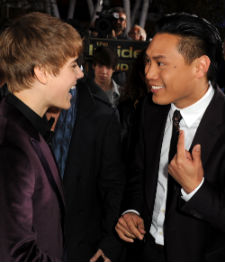 Having proved his facility bringing pop entertainment to a young, plugged-in audience with successes both theatrical (Step Up 2 & 3) and digital (The LXD), 31-year-old director Jon M. Chu was in many ways the perfect choice to helm a biopic of YouTube sensation-turned-pop phenom Justin Bieber. The resulting film, Never Say Never, is a generation-defining concert doc filled with rare peeks into the life of the 16-year-old performer. It's also got slo-mo hair tosses and shirtless scenes. Bieber Nation, prepare thyself.

Chu's film chronicles Bieber's meteoric rise from humble beginnings (born to a single teen mom, raised in Canada) to international multi-hyphenate recording artist (his second guest turn on CSI hits Feb. 17), making a strong case for the youngster's talents by splicing together home videos of his childhood performing days, his infamous self-uploaded YouTube hits, and new footage culled from a few weeks on the road working toward the big show: a sold-out night at Madison Square Gardens. The key, Chu says, was in finding a compelling non-concert based story to tell -- that, and making Bieber's fans (AKA Beliebers) a part of the fun.

Movieline spoke with Chu, the grand ambassador of Bieberdom, to find out how long it took to break into Bieber's inner circle, the kinds of footage he always knew the fans would want, which M.I.A. rapper might make an appearance on the DVD (hint: his initials are S.M.) and why Kanye would've made it into Never Say Never -- if he'd just shown up.

You've gotten to be so involved with the fan community, through Twitter. What was it like to finally see Never Say Never with those truest of Beliebers?

That experience literally brought me to tears. I love it when they are involved in the movie like that. I remember watching The Lion King when I was a kid and kids were cheering when Mufasa came on and booing at Scar, and there were dates, grandparents, parents, kids... that idea of what communal movie watching is all about. You can watch it at your home, but there's something different about everybody coming together to watch a movie.

Obviously this movie was intended for existing fans. How much did you have in mind of what kinds of moments and revelations you had to include to make Bieber fans happy?

It was process, for sure. I knew that they had strong opinions but because I didn't know a lot about the Justin Bieber lore, I didn't know what was sacred or not. I had a bunch of ideas; we had done an outline, because coming into the film I didn't want to do a concert film. They came to me with a concert film, but I don't do concert films, I don't really love concert films. I love great stories and I love musicals; maybe there's a great way to use the music to help tell the story, the way Chicago intercuts a performance onstage with the story -- let's recontextualize all this music to help tell the story. And because I was fresh to his music and to his story -- I knew a little bit about his story, but not a lot -- when I learned more, going through his home videos and interviews, songs would pop into my head. "That could be great, I remember that moment in that song." We were putting pins down.

And Twitter helped you tap into those millions of Bieber fans out there.

The fan stuff, I did ask about on Twitter. Because as soon as I joined this project I went from 12,000 followers to now, I think I just passed 150,000 followers -- all because of the Bieb. I was with Justin backstage after one of his concerts and he said, 'I'll Tweet your handle -- watch what happens.' No way. We literally were refreshing and every time we'd refresh, there were 500 new people. I was like, "This is nuts." I recorded it on my iPhone to show what it was like. I don't know what happened to the video, I need to find it, because it was pretty epic.

I asked these fans what they wanted and they said certain things so I always kept it in my mind. But where their heads were at was often different from maybe what the movie needed [laughs]. They wanted shirtless Justin.

And you gave it to them!

[Laughs] A couple of parts! I actually didn't realize how much we put in until the fans screamed every time. But yes, they definitely made aware of how many times we put it in. And we used a lot of their videos. We did a thing where we asked them to submit videos, and we shut down the server in the first 10 minutes. We got over a million hits in that 10 minutes. Ten thousand submissions -- real, recorded video submissions in that first 10 minutes. By the first hour when they got the server back up, there were a hundred thousand submissions.

Those user submissions get turned into a collage of Bieber fan videos that multiples exponentially during one part of the film. What was your visual impetus for that segment?

I wanted to feel how it feels to be on Twitter and have somebody text you in the middle of the day that you don't know. How it feels when you're sick and all these people pour their love on you. There is a presence; it's not just a computer screen that you log into. It is always around. It is constant in his life. And I didn't realize that until I was brought into his world, and I thought it was important to telling his story.

Your film suggests that when lonely on the road, Justin turned to social media as a comfort and wound up with millions of followers.

Yeah. I remember being on his bus, and there was a certain point when I was like, I don't want any crews anymore. Send all the crews home, he's uncomfortable with you guys. Because he really didn't want them around. I just went with him with my little 5D camera and a mic, and it was just me and him. Sometimes I would just record with his voice, without video, just to make him feel comfortable. I lived on his bus, slept in the bunker, played video games at two in the morning. That's where I got a lot of the real stuff, where he's just normal. And I remember he would Tweet a lot -- and it was those Tweets that would get him through the night sometimes when no one was on the bus, his mom was asleep, and he was going to another city for another show. That was his life.

Did it take a while to gain his trust and get him to be comfortable opening up to you and your cameras?

Well, it's not about that. There's this video online of Brett Ratner and Michael Jackson listening to a song on the radio, and they're doing absolutely nothing. I've watched it so many times just because it's fascinating. It may not be fascinating to them, but I keep thinking about the people in the cars next to them. They have no idea Michael Jackson's there, and it looks so funny -- he's such a normal person but he does have an extraordinary feel about him. That's what I want.

You may feel that it's weird, but everyone around you wants to see what that is. We will never put anything in the film that's boring -- that's not the point. I'm going to find things that communicate who you are through what you do. If that's video games at two in the morning, then that's what it is. Once we started to have those conversations, he still didn't get it. It just took time. It took time, me being around. I remember a time when we were on his bus, just me and him. It was so awkward. Then he turns to me and looks at me, and I'm like, "Yes?" And he's like, "Come here and check out this YouTube video." He shows me this funny YouTube video, and I go, "Hey, I'll show you one," and we bonded over these videos. It was the first time he let me in; I remember calling my producer after that like, "I think he just let me in." From then on he would kick people out of a room and I could stay.

How long did that take?

I would say three and a half weeks of being around him, all the time.

And you had a pretty short window of time to film anyway, right?

Yes. It was fast. We were on the road and I went back a couple of times, just me and the camera. It was really the second time that we broke through.

At what point, and how, did you know that you had enough material?

At the point where they said the Avid couldn't take it anymore! We just packed it in. Even two weeks before we locked picture, we were importing footage because he had new stuff that he was getting on the road. We had over 30 terabytes of footage. On Step Up 3 we had four terabytes. And I overshoot. So this was nuts, but we kind of had to cover our asses because we weren't with him for a huge amount of time to begin with.