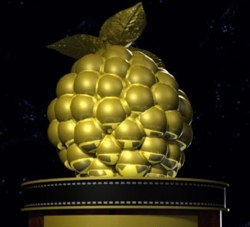 Is there anyone reading this who honestly did not know that Sex and the City 2 and The Last Airbender were terrible, terrible movies? Because just in case, this morning's Golden Raspberry nominations reaffirmed that knowledge for everybody. Thanks? What started out as a way to poke fun at some laughably bad films -- when no other medium for doing so existed -- now, frankly, feels like piling on at best and mean-spirited at worst. Enough, already!

The Golden Raspberry Awards (or Razzies) were started as a joke by John J.B. Wilson in 1981 after watching a double feature of the infamous roller-skating disco musical Xanadu and the infamous Village People movie Can't Stop the Music. Such origins alone perfectly illustrate why the Razzies used to be an interesting statement on popular culture: While Xanadu and Can't Stop the Music are indeed bad movies, they're the types of bad movies that are fun to watch. I mean, Xanadu was kitschy and endearing enough to eventually become a Broadway musical. There's nothing kitschy or endearing about last year's winner, Transformers: Revenge of the Fallen. It's just an extremely obvious selection: a movie that made a ton of money that everyone hated. If the selections are going to be this obvious, then seriously, why even bother?

Of course, the Oscars pick some obviously good movies, but that's the point: People like seeing things they enjoy -- both good and bad -- rewarded accordingly. And as we've seen over the last 10 years in particular, for better or worse, the Academy often go out of their way to honor smaller films that much of the world may have never heard of were it not for Oscar buzz. The Golden Raspberries once shared a similar emphasis, recognizing a spectrum of films that were, let's say, a little more obscure than the well-known clunkers they pick today. Over the Razzies' first decade, nominees included the likes of Saturn 3, Windows, Megaforce, The Lonely Lady, Bolero, Blue City, Tough Guys Don't Dance, Mac and Me and Speed Zone! And which movies were nominated from 2009? Transformers: Revenge of the Fallen, All About Steve, G.I. Joe: The Rise of Cobra, Land of the Lost and Old Dogs -- five films with a combined worldwide box-office gross of over $1.3 billion. Were these really the worst movies of the year, or were these the worst movies that we've all seen?

The Razzies do historically boast at least a semblance of relevancy. Take Neil Diamond, the first-ever winner for Worst Actor for his performance as Jess Robin in The Jazz Singer. (Happy 70th birthday, by the way, Neil.) Can you name the next time that Neil Diamond ever appeared in a film not playing himself? That's right... never! The second winner was Klinton Spilsbury for the title role in The Legend of the Lone Ranger -- a role that found every word he uttered dubbed by another actor. He hasn't appeared onscreen since. Who won last year's Razzie for worst actor? The Jonas Brothers for playing themselves in their concert film Jonas Brothers: The 3D Concert Experience.

The Jonas Brothers? What does that even mean? While virtually no one over the age of 20 may like the Jonas Brothers, that "award" just seems petty and, again, like piling on (The Spice Girls won Razzies for 1998's Spice World, but that was a scripted film, not a concert movie.) A case could be made that Paris Hilton's 2008 win for Worst Actress was in the spirit of Diamond or Spilsbury, but it wasn't; the difference is that Diamond and Spilsbury were both attempting to give a good performances. Hilton was stunt-cast in The Hottie and the Nottie and Repo! The Genetic Opera, and awarding her a Razzie just played into the plan.

What we see more and more often with the modern-day Razzies is awarding well-known actors who were not blessed with great scripts (this did happen on occasion in the early days, as with Laurence Olivier for Inchon, but it was the exception, not the rule). That first decade of winners is littered with names like Christopher Atkins, Prince, Andrew "Dice" Clay and the aforementioned Spilsbury. The last decade has recognized Mike Myers, Eddie Murphy, Ben Affleck and John Travolta. In other words, there seems to be a concerted effort to "embarrass the bigger names."

And as you probably recall, Sandra Bullock won Worst Actress last year for All About Steve. Now, did Bullock really give the worst performance of 2009, or did the disdain toward her character have more to do with her being a well-known name who also made a promise to appear in person if she won the award? Bullock famously showed up to accept her Razzie and, in the process, handed out copies of All About Steve to those in attendance. It was kind of lost amid her Oscar win the next night, but she made a really good point in her Razzie acceptance speech. "This is the deal I'm going to make you, seeing how when I said I would show up, I miraculously won," she said. "I will show up next year if you promise to watch the movie -- and I mean really watch it -- and really consider if it was really and truly the worst performance. If you're willing to watch it and [you reconsider], then I will come back next year; I will give back the Razzie."

Her point is, their voting is ill-informed and based on what will get the most headlines. If the Razzies could have gotten away with nominating Avatar in 2009, they would have done so just for the attention.

Let's put it this way: Isn't The Room infamous today for being widely considered one of the worst movies of the last 10 years -- if not all time? People attend sold-out midnight showings to this day based on it's awfulness alone. So, considering the Golden Raspberries pick the worst movies of any given year, The Room was nominated for Worst Picture, right? Alas: The Razzies were too busy in 2003 devouring low-hanging fruit like Gigli, Charlie's Angels: Full Throttle and The Cat in the Hat. For all the attention we pay to the Razzie nominations every year, every single one of us could have predicted those same films. There's absolutely no research involved in what films get nominated. There's no expert opinion. The Razzies should be finding movies like The Room. Not only are the Razzies unnecessarily mean, they're downright lazy.

Anyway, another job well done today, Razzies! Maybe this year you can get the cast of Sex and the City 2 to show up to your ceremony.