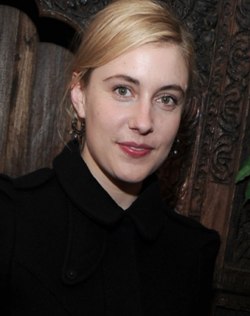 Last year's Greenberg may have marked Greta Gerwig's entrance into mainstream cinema -- when you come from the world of making nano-budgeted improvised films with your friends, a Noah Baumbach project is a big film - but 2011 will be the year the indie darling truly goes Hollywood. In this week's friends-with-benefits comedy No Strings Attached, Gerwig stands out as Natalie Portman's level-headed BFF; in April, she'll play the object of Russell Brand's affections in Arthur. And next month, she'll vie for her first major acting award at the Spirit Awards, nominated (opposite No Strings Attached co-star Portman) for her work as a winsome Los Angeleno in Greenberg.

Here at Movieline we're big on Gerwig, obviously, so meeting for tea with the 27-year-old ingénue was a no brainer. In a frank and far-reaching conversation, Gerwig pondered her mainstream break-out, girl-crushed on No Strings Attached writer Liz Meriwether and co-star Natalie Portman ("A real girls' girl -- a dinner party-having, wine-drinking, laughing-too-loud kind of girl"), explained her idea for a YouTube sex scene montage, outed Whit Stillman's love for Caribbean dance-hall music, and revealed the personal hometown-set script she's hoping to film in the next few years.

How funny is it to you to have been nominated for an Independent Spirit Award for your work in Greenberg, which was touted as your big mainstream breakout role?

I know! I suppose it's true, ostensibly it looks like I've gone mainstream. Actually No Strings Attached in a funny way is very mainstream, but the reason I was excited about it was -- I mean, I love Ivan Reitman, comedy god. Stripes was my favorite movie when I was a kid. But Elizabeth Meriwether, who wrote the script, was a weird downtown theater kid and she was making really cool plays when I was in New York when I was in college. And I was obsessed with her plays. She wrote a play called Heddatron, which was Hedda Gabler with robots, and she did a play called Nicky Goes Goth and another one called Mistakes Madeline Made. She was really funny and smart and awesome and I would have done a movie with her if they had said they're making it for $5 and you're not getting paid. So even though on the surface it looks mainstream, I would have done it anyway.

I have such a girl crush on her.

She's sick. She's awesome. She is, like, the most charming, funny lady that I know, and so self-deprecating and full of really charming self-doubt. I just love her. We hit it off and I auditioned for Ivan, and I got a role! I would have done anything for her, so it's odd. It still feels like it came about in the same kind of organic way that everything else has come about, it's just that I think that the people that I started out making work with are now more successful. Like the Duplass brothers; now they're making movies with movie stars and studios and stuff. One of my very good friends, Lena Dunham, is now blowing up all over the place. We all were doing this, we were all hanging out and making stuff together before and I think it was sort of happenstance that we came up all together.

OK. Greenberg is still indie enough to warrant Spirit Award nominations and No Strings Attached hooked you because of Liz Meriwether's plays, but your next film has got to be your true blue mainstream debut.

Arthur is super mainstream. But Russell Brand and Helen Mirren -- that's about as great as you can get. I had the best time. And then I did a Whit Stillman movie after that, so it has been a mix but I don't feel I've strayed from the path of inaccessibility.

That reminds me; Roger Ebert wrote something really sweet about you to that end. He said, "I have a weakness for actresses like Greta Gerwig. She seems reasonable and approachable."

[Laughs] That's really sweet! That's very nice. I hope that I'm reasonable and approachable, I want to be. I always joke about my dad, you know when they say a person has a certain je ne sais quoi? I have a jens sais quoi. You know what it is. I don't have a whole lot of mystery, which I think I'm happy for. I mean, I can't change it.

So you probably hadn't heard that quote. Do you read reviews?

I try not to. I think two things are true; it's bad to read things about you if they're good or bad, because if they're good you'll start kind of aping yourself, but if they're good or if they're bad you know anyway. You get the gist from people and how they interact with you, so you can usually tell. When it comes out, my friends will be like, "It'll be OK," and I know we got trashed, Variety hated us. Or they'll say, "Wow, so awesome!", and I know we did well.

How did you react to your Spirit Award nomination for Greenberg?

I was so surprised. You know what's great is that really, the critics came through with the year-end lists. Ben's performance is so great in it. I think it's just hard when a movie comes out in March because it's not the awards frenzy and it's easy to get lost in the shuffle. So I'm really glad that the movie has gotten so much year-end love, because I think it totally deserves it.

Was Ben the first mainstream movie star that you had worked with?

Yeah, Ben's my first. Ben Stiller is my first!

What kind of new experiences did you have on Greenberg as opposed to the smaller films you'd worked on before?

That movie was the first of many things for me. It was the biggest film I'd worked on and he was the biggest star I'd worked with, so a lot of things felt bigger and different. But he was just as up for everything and game and in there and ego-less as anyone. Completely ego-less. And also, he was playing a character that's a hard person to spend time with and like, and he never sold him out, he never said well, I'm worried that he's not likable enough, I'm worried that he has to be this way or that. He had enough respect for the character that was written to not pander to anyone's idea of what they could stomach in a character. Which I thought was really admirable. It sounds simple to say that's just what acting is, but so much of the time it's not that. So much of the time I think people are worried about, they're not going to like me, they're not going to think I'm pretty, they're not going to think I'm handsome and mean... and it's so nice to just let it all hang out.

Yeah -- Blue Valentine, Black Swan... ladies getting it on! They're all different movies and it's done differently; I think Greenberg's use of it is the most comedic, because there's something so funny about people hooking up for the first time and he immediately goes down on her. [Laughs] I think, I hope, it's part of a larger trend of sex being portrayed frankly. But women having sex has been a problem for a really long time, especially on film. It's something people do. I've always said I never want to do a shot in a movie where -- you know like when a man and a woman have sex for the first time, usually in a movie where there's no nudity and the sex is fake?

She keeps her bra on, and they're both covered by an L sheet...

Yes! But if they show sex, in that shot it's usually a two-shot from the side and you know the moment his penis goes into her because she kind of arches back, and it looks so weird and fake. Like, now they're having sex! And it's in so many movies I want to make a YouTube video of all these girls going "Uhh" and arching back. Sometimes they'll cut to an above shot of just her head moving on a pillow... I think it's just so funny the way it's portrayed because it's like I don't know who's having sex! At some point I'm sure you've had sex like that, but just in general I think it's so strange. I think it's always good when either men or women are multi-dimensional, they're people. And I don't need to see sex in every movie, but I think it's nice that it's sort of become part of what we see -- we see sex scenes. In some movies.