Much is being made today about Ricky Gervais' performance as host-cum-roastmaster at the Golden Globes on Sunday night. Here at Movieline HQ, we're firmly on Team Ricky, and it seems like we're not alone -- celebrities like Jimmy Fallon and Jason Bateman praised the unctuous Brit for his ribald comedy. But that doesn't mean everyone enjoyed the public celebrity berating -- just ask Judd Apatow and the Hollywood Foreign Press.

The normally irreverent funny writer/director voiced his displeasure with Gervais' attitude over the course of various tweets on Sunday night. Like this one: 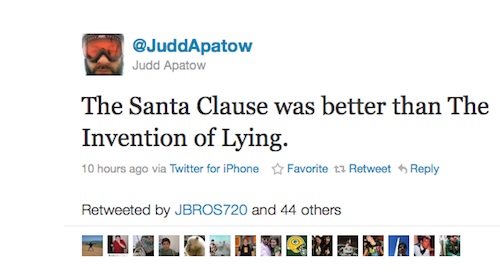 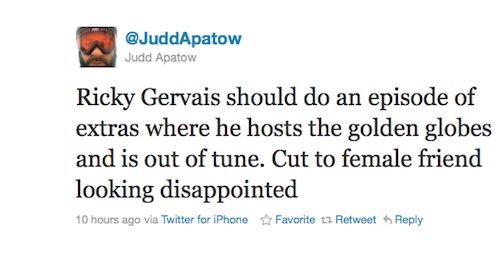 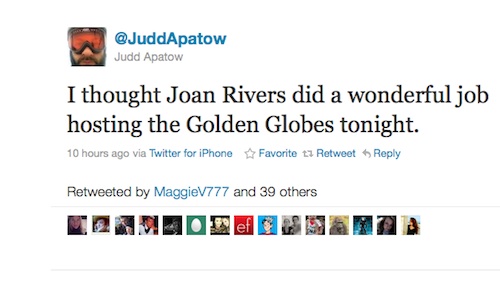 Um, burns? I must have missed the memo where Joan Rivers wasn't funny.

For his part, Apatow offered more than just pointed, anti-Gervais commentary. Asked by a follower if he was a fan of the The Office creator, Apatow wrote, "I am, but I lean [Stephen] Merchant. He makes me laugh crazy hard." He also proved himself to be unofficial president of the Tim Allen Fan Club. When another follower talked about how great The Santa Clause was, Apatow wrote, "That's my point! As was Toy Story. Mean is too lazy for RG."

Which brings up a good discussion point for us non-famous-types: Is it? Many of Gervais' jokes weren't that funny on face value -- after all, mocking Charlie Sheen is about as fresh as mocking George W. Bush. As has been pointed out from pro-Gervais camps all over the Internet, the things Gervais said are things we've all thought at one time or another -- albeit without a charming British accent and devil-may-care shrug. The nastiness -- and gall -- of the jokes is what made them spark. And perhaps that's why celebrities are so incensed: Gervais pulled their emperors' clothes off one stinging barb at a time.

Or maybe he was just a bitter pill -- nasty and rotted to the core -- who should have let the gathered celebrities enjoy their celebrity for three hours. As one member of the Hollywood Foreign Press told PopEater, "Ricky will not be invited back to host the show next year, for sure. [A]ny movie he makes he can forget about getting nominated. He humiliated the organization last night and went too far with several celebrities whose representatives have already called to complain."

As the Fox News would say: You decide?