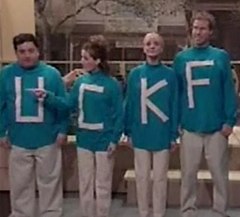 This past weekend, Cee Lo Green, riding high on his hit song "F*ck You," was the musical guest on Saturday Night Live. His appearance resulted in a sketch in which music executives contemplated how to promote his song with such a glaring expletive in the title, which was really a riff on SNL itself contemplating how to let Cee Lo Green sing his ever-popular ditty on live television. The word was danced around this past Saturday, but never uttered. But! During the long history of SNL, that word has made it out to the live audience on more than one occasion. Here's a brief glimpse at the cast's strange relationship with the F-word.

(Note: Numerous musical acts ranging from R.E.M. to The Time have dropped F-bombs, some almost inaudible, some not, over the course of SNL's history. Considering that it's almost expected that this is going to happen with musicians (edgy!), this list won't include those.)

If, when SNL started, an office pool was formed with the intention of picking the first person to ever drop the word f*ck on live television -- especially considering the names involved: Chase, Murray, Belushi, Aykroyd -- it would obviously be the recluse back in accounting who's never watched TV in his life that would have randomly picked the name Paul Shaffer (you know, the same loon who picked Butler to wind up in last year's NCAA men's basketball championship game). Yes, the same Paul Shaffer who leads David Letterman's band on the Late Show is the same guy who, in 1979, confused the word "f*cking" for flogging on the show's 100th episode. Considering the nature of these types of sketches, repeatedly using a word as a replacement for an expletive (similar to the sketch that aired this past weekend), it's never too surprising when one slips out. Shaffer just happened to be the first, but he was far from the last.

No clip is online, but Hulu Plus subscribers can watch that particular episode here.

No matter how bad you think a recent episode of Saturday Night Live may be, nothing compares to the stink bomb that was the 1980-1981 season immediately following the departure of Lorne Michaels. Not only was it bad, but there was absolutely no sense of order on the now Jean Doumanian-produced show -- and this incident wound up being a catalyst for pretty much the entire cast being fired (save for a couple of guys named Murphy and Piscopo). Dallas's Charlene Tilton was the guest host and Rocket was involved in a "Who Shot J.R.?" type sketch. During the good nights, Rocket pretty brazenly shouted out, "I've ever been shot in my life. I'd like to know who the fuck did it." (It's also of note that during this episode Prince slipped a "f*ckin'" into his song "Partyup.") It's one thing to accidentally let it slip out like Shaffer, it's another thing to be malicious. Rocket (and Doumanian) would last one more episode on the out-of-control SNL before Dick Ebersol took over.

Not malicious, but certainly not a play on words either, this was simply, "one of those moments." It almost sounded like MacDonald had something caught in his throat, or, perhaps, wasn't quite deciphering what was on the cue cards. Regardless, during "Weekend Update," MacDonald blurted out, "What the f*ck was that?" He immediately realized his faux pas and quickly announced that this was his "farewell performance." He wasn't that far off from the truth: In late 1997 MacDonald was fired from "Weekend Update" (and replaced by Colin Quinn) by NBC West Coast President Don Ohlmeyer over MacDonald's relentless attacking of Ohlmeyer's friend, O.J. Simpson.

SNL has a history of sketches where a substitute word is used in place of f*ck, which resulted in two of the slips on this list. Now, let's be clear, nothing went amiss with the Cameron Diaz hosted "Jingleheimer Junction" sketch. But, in the history of SNL, no other sketch toyed with the dreaded F-word more than this take on a children's show featuring four characters that have unfortunate first initials.

Like Rocket, the unfortunate thing for Slate is that she only lasted one season on the show, so when her name is ever mentioned in relation to SNL, the word "f*ck" will always be the first thing brought up. In a sketch that repeatedly uses the word "frickin'" as its punchline, Slate, on her first show, slipped up and instead said the line, "You know what? You stood up for yourself and I f*cking love you for that." It's not so much the word, but the deer-in-headlights look on Slate's face after she realized her error that makes this clip so painful to watch.