Paris Hilton Plays My Favorite Scene: 'Who Was It? Ben Stiller or Matt Damon?' 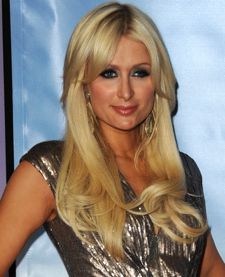 Say what you will about Paris Hilton, but the blond heiress/actress/socialite/entrepreneur arrived promptly for NBC Universal's Television Critics Press tour event on Thursday night in Pasadena, and gamely talked to each and every reporter who requested a word. Like Movieline! Ahead, Paris -- who stars on the new Oxygen series The World According to Paris -- discusses her perceived life as a dumb blonde and her favorite film scene (which, ironically, is from a movie about a dumb blonde).

What side of Paris Hilton are we going to see in your new Oxygen series that we haven't seen before?

A side that no one has ever seen. On The Simple Life, I was just playing a cartoon character of me and in this show they get to see the real me. You know, I'm not always happy. Things make me cry. Things affect me a lot. I really show all of that emotion on the show.

You've managed to establish yourself as a successful brand in spite of the media and certain reality shows portraying you as a dumb, attention-seeking blonde. Why do you think that is?

In The Simple Life, producers told me to play a dumb blonde and that's what I did. I didn't realize at the time that I'd have to do that for five seasons and keep up this character of me. I think people assume that that is how I am in real life but I'm actually quite a businesswoman. I have a new reality show, 17 different product lines, my business, books. It's exciting.

Do you ever think about your legacy? How do you want people to remember Paris Hilton?

I want people to remember that I could make people smile and be a great entertainer.

At Movieline, we play a game called "My Favorite Scene" where we ask actors to remember their favorite film moment of all-time, and explain why it resonated with them. What is yours?

I really love the movie There's Something About Mary. One of the funniest scenes is when the dog, like, dies and Ben Stiller has to electrocute it back to life. Who was it? Ben Stiller or Matt Damon? [Editor's note: It was Matt Dillon.] And the dog, like, comes to life. I thought that was hilarious.

No, thank God not.

A hilarious moment, indeed. In celebration of Paris and her new Oxygen show The World According to Paris premiering this spring, her favorite film scene...