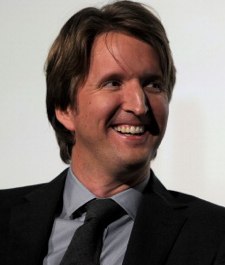 Tom Hooper isn't ready to talk about his Oscar chances just yet. As he points out, The King's Speech, already a critical darling, has yet to make a dollar at the box-office. But that hasn't stopped the prognosticators from predicting at least some Oscar gold for The King's Speech -- not a bad situation at all for a guy who got his start directing a Right Said Fred Sega commercial (yes, that Right Said Fred).

These days Hooper is known for his certain flair directing the historical drama -- the Emmy winning miniseries John Adams, for instance -- in a contemporary way that is both painstakingly designed and rigorously composed. The King's Speech applies that approach to the tale of George VI, the World War II-era English monarch tasked with overcoming a severe speech impediment before addressing his subjects. Movieline spoke to Hooper about avoiding clichés, the off-screen friendship that formed between Geoffrey Rush and Colin Firth, the Oscar buzz for his film and, of course, what it was like working with the men who brought you "I'm Too Sexy."

This movie really dips into that fear of public speaking.

That's what's strange about this film -- doing the marketing campaign -- you keep being reminded of all your hero's predicament. The other day I won this Hollywood award for directing and, you know, you have to go up in front of a room. It contains Sean Penn and Schwarzenegger was there and Chris Nolan was there... and you have to speak. And then you face this mic and, of course, you end up getting nervous about the speech.

Do you have flashbacks to your own movie?

Well, kind of. But it's sort of weird. We all have that fear. And I've done it once, there was one... I can't remember which awards show, but there was one where I just had that moment of losing my train of thought and you're looking around this room of 2,000 people and you're thinking, f*ck.

How did you avoid making this not feel like a typical English period piece? It certainly didn't feel like one.

Well, you've got to understand how much I did not want to make a clichéd royal movie. To the point of obsession. So wherever I could, if there was a "royal drama cliché," I would subvert it. For example, the script I started with, [screenwriter] David [Seidler] described George VI getting dressed up in tremendous finery, with a plumed hat and medals and sword. And then going to Wembley as he does in our movie. And in Wembley there's his father who's dressed in plumed hat and finery with his younger brothers. And my heart sank. So I did a bit of research and I found a little short movie clip of the event and Bertie is dressed all in black. He has a black top hat and all the men around him are dressed the same. And I'm like, what a joy. He looks like an everyman. There's nothing about him that would mark him out as a member of the royal family.

It would have been hard to relate with the man in the original description.

No. And I also found that his father isn't there, nor his brothers. And that actually makes more sense because he's the brother that doesn't mean very much, so why would they show up for him? If the King was there, he would speak. And I loved this idea of first meeting him up against a dirty brick wall in a corridor on the staircase leading up to Wembley. So the first time you see him is this scared guy against a brick wall. So, apart from the height of the hat, it's a totally contemporary image. The way I work is to get away from the cliché.

To give you a good John Adams example: I do the research and I discovered that men, under their wigs, used to shave their heads. And they used to think of their wigs as hats. So that leads me to have this image, in the first episode, of Giamatti cradling his shaved head in front of the fire. And suddenly, in the close-up, it's a contemporary image -- shaven heads is a very modern thing. Part of what you are probably reacting about is a sense that you've seen it before, "here we go again." I want people to be in the present tense -- images where the period is not getting in the way.

Before this film, I had never really thought about the King's role during World War II. The focus is always on Chamberlain and Churchill.

I think in America probably the only part of the story that's famous is the King who gives up the throne for love. Do you know the works of John Patrick Shanley? He wrote Doubt. I think he was brought up in a working class family in the Bronx or Brooklyn. And John said to me that growing up, if his father was lazy, his mother would go, "You don't do anything for me. The King of England gave up his throne for love, what have you ever done for me?" So I knew the place it has in the popular imagination here. But what's so intriguing is to tell the story of the younger brother who has a terrible stammer, who is forced to become king kind of against his will right at the moment that radio is taking off as a mass medium. Right when the medium was only a live medium and you couldn't prerecord as the second world war is approaching. And the guy who got his through this is this wonderfully iconic maverick speech therapist who is not even a doctor. It's so subversive as a story, I love that about the story.

Whenever you filmed both Colin and Geoffrey together, you just had to know you had something special, right?

That should be on the poster.

Yeah... But I think it kind of betrays itself if you're making a film where people are discovering that someone's an a**hole. It's never going to have quite the same DNA as a film where people like each other. They also have some different energies: Geoffrey has this incredible drive and enthusiasm and Colin is more reserved in an English way. To bring those two men into a room, I thought Colin was brought out of himself in some way by Geoffrey.

With a movie that's getting this much buzz, is the Oscar talk fun or is it annoying?

I just feel it's a bit early. I feel like the film has yet to make a dollar at the box-office. Call me old-fashioned, but let's do that first. I really genuinely... What I most care about is that the film reaches a wide audience. Because I really believe it is for the wide audience. I don't think it's an art film. I've now sat in audiences in Telluride at ten and a half thousand feet, at sea level in Toronto, I've sat in the Chinese theater on Friday night on Hollywood Boulevard, I've sat in New York and in my hometown, London -- it's unbelievable democratic, the reach of this film. The film plays the same in America and England. The humor is always consistently good; it really makes people laugh and it really makes people cry. And I want to give that experience to a ton of people; I'm really evangelical about it. It's a great moviegoing, communal experience. I mean, I keep sitting in. Normally you're bored of it.

You do a lot of movies based on real people. It's a pretty wide range: American history, English history, sports. Why do you like to tell the stories of people who actually existed?

I mean, the connection is just great storytelling and stories that really interest me. I think probably it's fair to say -- and I've done contemporary stuff; I did Prime Suspect with Helen Mirren and EastEnders which is about as contemporary as there is -- but, to be honest, I really struggle to find original screen fiction where the character writing is anywhere near as good as these scripts based on real people. And great character writing tends to draw great actors. I've had a uniform experience of working with great actors over the last few years -- and I love it.

More than that, I think I am interested in iconic characters and what they reflect back to us about our national cultures. In the case of John Adams, I knew this was going out during the U.S. primaries. And I thought, well, I'm living in a country where there's this incredible schism about physical values. It's divided against itself. And is it possible to trace the origin of this schism back to the personalities of the founding fathers? Researching, I kind of found that it was. I found that it was hugely interesting thing to do in 2008: To see 2008 through the prism of that story. I'm interested in the big issues, and I'm interested in film. Emotional big issues and political big issues. That's why I'm not really interested in genre filmmaking.

Reading your biography, I have to know this: What was it like working with Right Said Fred?

[Laughs] God, you've done your research. That's very impressive. Well, it was a very surreal moment. I was doing an extended essay at Oxford University on James Joyce's Ulysses and Finnegans Wake. I've got a 12,000 word essay and bunking off without telling people to direct a commercial staring Right Said Fred and some dancing fat grannies for Sega, the games company. And I just thought that never again in my life will I have the strongest disjunct between high and low culture. But the short answer is: Right Said Fred is extremely nice. And disappointingly uneccentric.