The original Movieline magazine ran a bunch of great features, but the most lamented one has to be Bad Movies We Love. The world never runs out of horrible, adorable films, and that's because they're the most gratifying to talk about. I haven't discussed my favorite movie, Rear Window, as much as I have Teenage Mutant Ninja Turtles II: Secret of the Ooze, and that's because James Stewart and Grace Kelly never rapped with Vanilla Ice about crime-fighting humanoids (though you never know about Thelma Ritter). The point of it all: Thanks to the infinite, Biblical, pathetic joy that bad cinema produces, we're exhuming Bad Movies We Love in weekly installments. Throw your vanities in a bonfire and join us!

Picking up where Michael Adams left off last year, our first BMWL selection reveals Cher's humble beginnings -- before she was a hardened Burlesque proprietress, an AutoTune empress, an Oscar-winner, or even an angry Indian chief, she was a lanky runaway who picked a new name from the dictionary and tried on lesbianism to pass the time. She was Chastity, the title heroine in a "dramatic romance" written, produced, and scored by noted non-multihyphenate Sonny Bono.

You'll be disturbed to realize that most of Cher's movies have been good. Silkwood, Mask, Moonstruck, Witches of Eastwick, and (grit alert!) Suspect qualify for three-star consideration or greater. But Chastity, Cher's 1969 bomb that scared her away from acting for more than a decade, holds an honorable distinction in cinema: It's the only Bad Movie We Love whose sequel was a human being. Unless Cher also has a kid named Mermaids Allman or an R&B-crooning stepson named T. Wit Mussolini, Chastity Bono remains BMWL's only true heir. Let's do Chas's kingdom justice.

First of all, Chastity is deep. You can tell from the poster: 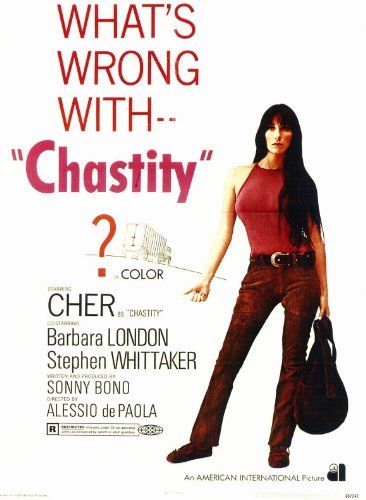 Plus, before the opening credits, we're treated to several minutes of Chastity sprinting toward the camera -- just like Jesse Owens. Quite interpretive. She's yearning, grasping for something, and it does not seem to be a CBS variety hour. I don't understand either.

Not long after we lay eyes on Chastity for the first time, we realize a few things about her: She's a fearless hitchhiker; she accepts the hospitality of strangers and never gets naked for them; she's impossibly svelte; she has no real feelings; she is a free, bra-less spirit; she wears that damn magenta top everywhere. But best and worst of all, she talks to herself all the time. All the time. For instance, in a moment of ingenious scrounging, Chastity invades a gas station and pretends to be an attendant. After milking a customer of his five dollars by pretending to know about dipsticks (metaphors, girl!), she dashes off and starts talking to herself internally.

"Well, Chas, now that we have financial success, have we decided where you're going to dine tonight?"

You might not get it yet, but Chastity's obsession with talking to herself makes this movie a BMWL. In fact, you should adopt Chastity's inner voices as a self-help guide: You will learn that calling yourself Chas and asking yourself redundant things is a soothing festivity worth 70-80% of your spare time. "Well, Chas," I just said to myself. "Guess it's time to continue watching Chastity and pretend it's got more to teach us than not to trust Sonny Bono's screenwriting talents. What a drag, Chas." See? Calming.

Here's what Chas has to say to herself once she stays the night with Eddie, the movie's first dude who treats her like a human being.

"Chastity, what are you going to do?" she asks. "I don't know. He's not my idea of Prince Charming, but who is? Hope he's not the octopus type. They're the worst. Or the bulldog type."

"Why should people be stuck with a name that they didn't get to choose? Suppose my name is Emily. Wouldn't that be awful? One day I got out the dictionary and I started looking through it. I got to the 'C's and it said 'Chastity: abstinence, sexual purity, freedom from ornamentation, simplicity.' I liked all of that except for abstinence because I didn't know what that meant. I went back to the 'A's and it said 'abstinence' and it said 'nonindulgence and voluntary restraint from desires.' And I liked that."

I can't think of a better reason to name yourself any single word than only kind of understanding its definition. I just changed my name to "Logarithm," and it feels so good. There goes my bra.

Now, Chastity's a hippie drifter at heart, so she's not going to settle down with Eddie and his house full of groceries and idiotic dialogue ("You're not a girl!" he crows at Chastity once. "You're a whole other thing!") Instead, she's going to freak out in his kitchen, go on a quick rampage about how "everything" in his house "works," and then flee to Mexico. Trauma! We're halfway through this 82-minute movie, and Chastity figures we're bored enough to need her to become a prostitute. She has never been righter.

But first, she talks to herself:

"I don't know why you have to go to Church," she wonders for some reason. "Why can't you go to the First National Bank and pray? I'm sure He's there. I'm sure He's everywhere."

Thankfully this movie doesn't try for any further religious symbolism. It gets back to forcing Chastity into talking to herself about, oh, anything that is a word.

"Well, Chastity, here are you are in a real Mexican cathouse," she says upon finding herself in a Mexican cathouse. I would say the same thing too! In my head! If I decided I was named Chas. Which I have.

The movie gets really effing weird here. Chastity tries hooking up with a nerdy john for $25, abandons him, and then follows a lesbian madam named Diana Midnight in a green burlap coat around the whorehouse, hangs on her every step, and what am I supposed to do, not point out that she looks like Shirley Jones? It's too late for that. I'm pointing it out. She looks like Shirley Jones.