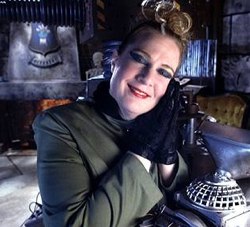 This week, Shout! Factory releases Mystery Science Theater 3000 Vol. XIX (yes, that's 19), featuring four more classic episodes from the show that made it OK to talk back to the screen: Devil Doll, Devil Fish, Ed Wood's Bride of the Monster, and Phil Tucker's infamous Robot Monster. A writer for most of the show's run, Mary Jo Pehl (who played the evil Mrs. Forrester during the SyFy run of MST3K), sat down to talk about her history with the cult cable classic as well as her current movie-riffing project Cinematic Titanic, which teams her with MST3K creator Joel Hodgson and fellow show vets Trace Beaulieu, Frank Conniff, and J. Elvis Weinstein on live shows and DVD releases.

What's your take on these Mystery Science Theater 3000 DVD packages that have been coming out? Do you notice when they do?

No. I'm rather detached from their release because it doesn't effect me at all -- I can't expect a check from them, I'm bitter toward [executive producer] Jim Mallon for repackaging and repackaging [these episodes]. I guess for the record, to make a less bitter interview, the packaging and the compilations are pretty cool and pretty fun, and when we're doing signings at Cinematic Titanic, people come through the line with these new packages, and that's usually my first introduction to them, so I'm always pretty intrigued at that point. I'm usually not on the radar for these releases because of Jim Mallon's deal with Shout! Factory and... well, I don't want to talk about filthy lucre.

So if people want to support your work, they should be coming out to see Cinematic Titanic, then.

With Cinematic Titanic, you're still hilariously goofing on terrible old movies. When you look back at the old MST stuff, do you feel like "I've gotten better at this," or do you look at it as your training ground?

I definitely feel like it was my training ground, especially since when I was working for Mystery Science Theater 3000, I wasn't talking back to the screen, I was just writing jokes. So it definitely laid the foundation for the riff-ery, the mockery, and I also feel like I have an act where I can really hone my joke writing and movie observations this go-round, and it's a lot more fun being part of the show.

You came into MST3K from the world of stand-up comedy. Were you already a bad-movie buff, or was that something that was thrust upon you?

Oh no, I was a real movie buff, but at that time, I hadn't really found my comedy-slash-movie-fan-slash-nerd-slash-geek community. What that did for me was land me squarely into the center of these people who were making really wild, obscure movie references, and I was in heaven. I really hadn't found that in any of my numerous workplaces, and about that time I was doing stand-up comedy and Mystery Science Theater, and both of those worlds really immersed me in being able to hone that affection.

People don't understand when you talk about life before the Internet, when you couldn't just find everyone who had the same obsessions as you in a matter of minutes.

Precisely! It's almost like you dare not speak its name at the workplace. During that period, I was working way too many jobs because I kept getting fired, and people didn't really get it. The people I worked with were so mainstream, and if you said that you went out to the art house movie theater the night before, the blank stares you would get -- really, the only point of reference was, "You mean you didn't watch Major Dad last night?" [Laughs] Seriously! The idea of going to the theater was really foreign to the people I worked with in the corporate workplace, and I think that's changed dramatically. 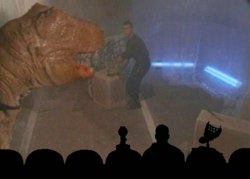 When you guys were doing MST, it was all about writing jokes together in the same room and bouncing off each other, but the Cinematic Titanic people live in different cities. How does it work? Do you write separately, and then it's winner take all?

Yes, we all write separately, and that has proved to be a lot harder, because you don't have the momentum or the energy. In a writing room, you could attempt a joke or have an idea for a joke at a certain spot, and then instantaneously, people would respond to that and offer a different angle or build on that and refine a joke. But as we're all writing separately, you can really get bogged down in it, because it's so tedious. You're alone, you don't have the energy, you're not making people laugh and people aren't making you laugh.

On the other hand, once we've done all our riffs separately, they're combined in a master Excel spreadsheet with time codes, and then each of us takes a section and assigns what we think is the best line to the right spot. And then when we do meet as a group, either through Skype or telephone conference calls or when we are in the same city for a gig, I think we're much more analytical. We each spend a devoted, concentrated amount of time with the script, so I think we come in a little better prepared to refine and to analyze the jokes, and that's when we make each other laugh. And that's when we're most nervous about the script, because you're operating in a vacuum, and you don't know if the script is funny or not.

And of course the difference between the end results of Cinematic Titanic and MST3K is that you're taking it to a live audience. Does that become another stage of the process where things get tossed or changed based on the response you get?

Yes, I think that's an essential step in the process. When we were doing MST, we had a nine-day turnaround, and it was very skin-of-the-teeth, so with 600, 800 jokes in a script, we had to deliver the product at a certain time, so there were definitely jokes that... there were even jokes that none of us got, but they made us laugh, so they'd stay in there anyway. There were jokes that none of us liked, but we would have to record the show to deliver it to Comedy Central or SyFy, and we'd just leave them in. And now we get to really gauge from the audience's response how a joke is landing, and in fact, we just premiered Rattlers in Boston a couple weeks ago, and we started our conference calls to start reviewing the script, and that's when we start bouncing it back and forth and saying, "I like this joke, but it didn't really get a good response," or "Do I need to deliver this better? Can someone give me a read on that?" So it definitely plays a part.

What do you think about the new crop of popular terrible movies like The Room and Birdemic? Do they have the same spirit as the older stinkers you make fun of?

Yeah, I definitely think there are some that have that je ne sais quoi of the old bad movies. I feel like in the new crop, there's more a tendency to be more self-conscious and more ironic and deliberate about making, quote, a bad movie. The movies we really looked for on MST and now with CT, we're really looking at the spirit of it -- the real intent there that the filmmakers set out to try to make a decent movie. They're not tongue-in-cheek, they're not winking at the audience. I don't think The Room is terribly self-conscious; I think the intent was to make a real movie. But I think we see a lot of films that are more about the idea of making a bad movie.

Besides Cinematic Titanic, what other projects are you working on?

I'm working on a book that's coming out in the spring, that has yet to be titled. And oh God, I can never remember what I'm doing.