The London Boulevard Trailer: Colin Farrell's In Bruges, Too 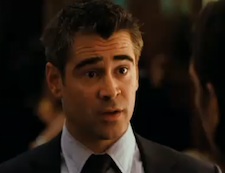 London Boulevard, the directorial debut from Oscar-winning screenwriter William Monahan, may have been sitting on the shelf for the last 15 months, but that doesn't mean you should toss it asunder like some other dumped winter release. (Boulevard is scheduled to hit American cinemas in February.) That's because -- hello, it stars Colin Farrell, looks like In Bruges and comes from the dude who wrote The Departed. Where do I get advanced tickets?

Farrell plays as an ex-con who gets work as a bodyguard for a lithe actress (Keira Knightley), falls in love with her and must come gun barrel-to-gun barrel with his gangster past (embodied by Ray Winstone, in the role of Brendan Gleeson). Crosses are doubled, family members are threatened and the whole thing seems like one pretzeled mess that's sure to end in tragedy, despite the best efforts of the soundtrack ("London Calling," really?).

Farrell looks to be in top form, even if the ex-con does resemble the character he played in In Bruges. It's probably a good idea for Farrell Fans (hand raised!) to hold this performance close, just in case it's the last time the talented star gets to play a small-time hood in a small-time movie. Considering his upcoming slate (Fright Night, Horrible Bosses and potentially Total Recall), it very well might be.