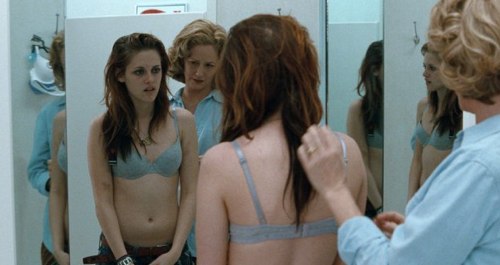 If we need another movie about unhappy middle-aged married people who have to be jolted out of their complacency so they can learn that life really is worth living, then Jake Scott's Welcome to the Rileys is hardly the worst result we could hope for. James Gandolfini is Doug Riley, an Indianapolis plumbing-supply salesman who still cares for his emotionally fragile, agoraphobic wife, Lois (Melissa Leo). But his frustration with her is understandable: When he trundles into the couple's bedroom after a long day, he finds the nightie-clad Lois reading in bed, her hair wrapped into prim little pincurls, a highly effective sex-prevention method. No wonder he's having an affair with the waitress -- played by Eisa Davis -- down at the local pancake joint.

But things start to turn around for Doug when he goes to New Orleans for a conference and meets a tough-cookie underage stripper -- and, we later learn, sometime hooker -- named Mallory (Kristen Stewart). For reasons that are at first hinted at and then clearly spelled out, he feels protective of her; he makes an abrupt decision to move in with her, but only to take care of her, not to sleep with her. He calls Lois to tell her he's not coming home, and her response to this news is the trigger that changes everything for all three characters.

These are all people you feel you've met before in other movies, if not all at once. But the movie's saving grace is that they don't always behave as you expect them to. And even though they're all potentially annoying, they don't wear out their welcome by the movie's end. The script, by Ken Hixon, allows every character plenty of breathing room, and the actors spread out in that space -- you can almost sense their gratitude at not being confined in an American Beauty-style psychofest about how soul-killing the suburbs are. And Scott -- unlike his father, Ridley -- understands the benefits of playing it cool, too. This is a movie where the drama is shaped more by quiet conversations than by noisy confrontations -- kind of the way things happen in real life.

At first, Leo appears to have been saddled with the thankless role of the overmedicated, underresponsive wife. Because Lois won't leave the house, her hairdresser must come to her, fashioning her hair into a blond helmet that would probably, if she ever ventured outside, be impervious to a monsoon. When Lois realizes she needs to change, the revelation hits her with a click, not a thunderbolt. And if the big transformation seems a little too painless, at least Leo plays it as something inevitable: This character can no longer live inside her skin, and so she changes her skin. The sequence in which Lois ventures out to the garage to start the family car -- she's baffled by its electronics, which tells us how long it's been since she's been behind the wheel, or even in the passenger seat -- begins as an act of tepid bravery and ends with her giving in to the comic absurdity of it all. The suggestion is that having a sense of humor about yourself is the first step in getting over yourself.

Gandolfini, with his Magilla Gorilla mug, never overplays his character's capacity for being a pushover. At first, he seems to be a prisoner, frozen in Lois' control beam -- he loses his temper with her when he discovers she's bought his-and-hers burial plots. "I'm not dead yet!" he tells her, though he seems to be convincing himself as much as stating a fact. When he meets Mallory, she at first appears to be an unlikely candidate for his friendship, or, for that matter, anything else: She tries to talk him into a private dance, her runny eyeliner and fishnet stockings practically signaling, "Damaged teen runaway here!"

But Doug is a caretaker: It's simply in his blood. (He must be a Virgo.) And before long, he's bringing his plumbing tools over to the dismal apartment Mallory rents -- from a creep-o who's always trying to extract sexual favors -- and freeing her ewky toilet of weeks' worth of crap.

Mallory isn't letting go of her crap so easily, and the movie, thankfully, doesn't offer any immediate, facile solutions to her multiple problems. What it does do is offer Stewart plenty of chances to frown and scowl unpleasantly; maybe she avails herself of too many of them. But she can't be that sullen for long with Gandolfini's Doug around, and the two of them end up making quite a pair. And when Lois shows up on the scene, Mallory doesn't immediately accept her as the proverbial mother she never had. There's conflict ahead, but then, conflict is sometimes the only way to move forward.

Stewart appears to have been constricted by the rigid parameters of the Twilight movies. Her character here is wary, not trusting (s Bella is), and maybe for that reason, she seems to take pleasure in a role that requires one long, kicking-and-screaming "No!" But two-thirds of the way through the movie, she hints with her eyes that she's possibly considering a "maybe." Welcome to the Rileys is a gentle, well-acted picture that is, at times, a little indistinct: The ambiguous ending is perfectly fitting; it's simply that much of what comes before could use some definition and shaping. But the movie's flaws probably stem from Scott's impulse not to push too hard -- and pushing hard would have been the greater mistake. This is a small movie with a big idea at its core: Kindness is what keeps people going. To overstate the matter would be like running over a petunia bed with a bulldozer, and Scott, thank goodness, knows better.