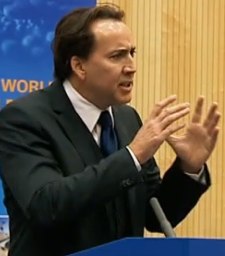 "I've played many parts," Nicolas Cage told a news gathering today as part of his new duties for the United Nations. "Heroes and villains, lovers and losers, and yes, criminals and crimefighters. But Goodwill Ambassador for Global Justice in the U.N. Office on Drugs and Crime is certainly my most challenging and meaningful role." That much is clear from Cage's gravity and demeanor (and that three-piece suit!) while addressing the media. He means business! Because somewhere out there, a child is about to eat his brother alive. Or so Cage has heard.

This speech goes on and on (I presume the BBC will let me embed the remarkable video here eventually), and hats off and all, but let's not kid around about the implications. When it comes to the volume of people affected by organized crime, these are some serious issues Cage is working to reconcile:

"The numbers are so large that they start to become abstract -- too big to comprehend. But I do not wanna focus on that. I wanna try to bring it down to the impact of transnational organized crime down to a human level -- particularly its impact on children. I met a young girl who had been the sex slave of a rebel leader and bore his child. I met a boy who was forced to kill his own sister at gunpoint. And... I was told about an 8-year-old boy... [cough] who was, um... made to, um... eat his 15-year-old brother alive."

Say whaaaa? Listen, I'm not here to trivialize or diminish the problem of transnational organized crime -- particularly its impact on children. I'm just here to say in context, the video's the funniest thing Cage has done since Raising Arizona, and shame on the BBC for hogging it all to itself. Regardless, I think we can all agree the kids-eating-kids racket must be stopped.