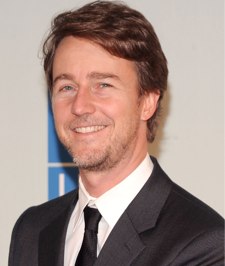 In Stone, Edward Norton takes on the role of Gerald "Stone" Creeson, a cornrowed, street-wise arsonist who, about to come up before the parole board, is looking to hustle his way out of prison. His parole officer, Jack Mabry (Robert De Niro), is three months from retiring, grappling with a booze problem, and saddled with a shadow of a marriage. Everything appears to be going according to a secret plan concocted by Stone and his sexually predatory wife Lucetta (Milla Jovovich) to release Stone, until the prisoner appears to have something approximating a religious epiphany. But is it real or is it fake?

Directed by John Curran (who directed Norton previously in The Painted Veil and wrote the screenplay for The Killer Inside Me), the story unfolds on the outskirts of a slow-decaying Detroit intended to reflect America in its current state of economic, political, and moral upheaval. The real prison seen in the film is Southern Michigan Correctional Facility, and Norton met with inmates to better inhabit the mentality of a man who will do anything to escape his confines. Meanwhile, in Austin, Texas, for the movie's U.S. premiere at Fantastic Fest, Norton talked about hanging out with career criminals, what it's like to go toe-to-toe with De Niro, and the challenges of shooting sex scenes in prison visiting rooms.

Much has been made of your propensity for playing characters with multiple personalities or hustler types, but this character seems different. He's moving towards integration or transcendence. I was wondering if you saw the character that way and if that was an appeal for you.

Definitely. I mean, I try to be careful because I think John Curran is such a... I so respect the seriousness of the way he looks at films, and that strong intent he puts into leaving certain things gray, for people to mull on, that I've been trying with this not to say, you know, what I think was true or not true. But I definitely did not read this film as a film about a con. I definitely responded to it, and John expressed it as an examination of what constitutes an authentic spiritual experience. And that was very interesting to me. Especially when John laid it up against, I think in his mind, an allegorical interaction with where the culture is in America right now, and the way that we've got these constructs that we use to define who we are, but underneath them a lot of things are decaying, and we may not be confronting the truth of ourselves, the way we're behaving. And when [Curran] started layering those kinds of ideas over saying, you know, "I want to put it in Detroit," the landscape of a place that was who we are and now is falling apart, I started to feel like, "Wow, he really wants to take an earnest look at people who are in a state of spiritual anxiety or are struggling with authenticity in their life."

For me, I know it's sort of parsing words, but people have drawn a connection through things I've done -- like, you know, duality or whatever. I get it, but I don't totally relate to it, in the sense that I don't really see many of the things people reference as duality per se. I just think they're complex. I don't go directly at themes of duality with a conscious eye, but I do get very, very drawn towards something that has, you know, layers within layers within layers. [With] Stone, John put it to me in a way that was very, very intriguing, which is that he just said, "I only have two thoughts on the whole thing. One, that I want it to feel like it's from Detroit, and from the margins of Detroit, very specifically." And he said, "The other thing is, the first time that guy's sitting in the chair, I want to look at him and go, 'This guy is not a very likely candidate for a spiritual transformation.'" And he said, "By the end, I want to really be questioning whether he might have actually had one." And, you know, that's just a very complex idea.

There are many ways in which the internal states of the characters are reflected in the setting, in the city, and the urban decay, and the movie is also a mirror for the culture at large. Do you see that American landscape as a wasteland or as an opportunity?

Well, let me put it this way. I think if John didn't feel that in collapse there was possibility of renewal, then I think you'd have Jack blow Stone away. Because that would be the ultimate kind of refusal to confront that he has done this to himself and possibly have the chance at something happening. But I think as ambiguous as it is, I don't think that John's intention is to leave you with the sensation that all is bleak.

Even though everybody looks at Nietzsche as very... People talk about nihilism, but the truth is his nihilism was full of the idea that you bust things up to renew them. It's very hard to see where you are at in the curve from the place you're in. I was looking at this series of lectures, and I noticed that Gore Vidal gave one; it was a very interesting subject line. Gore Vidal kind of put up what he thinks is the vice grip that American history has led to, and kind of put out this idea that he thinks without some serious upheaval, we won't escape the vice grip of the hypocrisy of a morally upright sense of ourselves that does not track with our imperial reality. He kind of talked about the humbling effect of history on a culture. I look at this film, and I'm like, "John definitely is interested, I think, in the idea of a humbling experience."