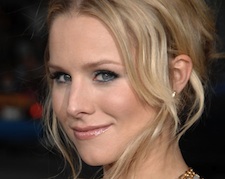 "Things That Will Never Happen" Day continues here at Movieline with a threat from Kristen Bell, who is ready to make this Veronica Mars feature film a reality for herself and the approximately 7,772 people in America who still care about Veronica Mars. In fact, she is so determined to reprise the sweet-faced teenage sleuth before she turns 40 that she may even charge the big screen adaptation to her MasterCard. There's just one problem.

"It's a business and the sad truth is that ... they're not going to relinquish the rights to something and let us do it," Bell told THR last night. "We really have to do it with them because they own it."

"At this point, Warner Bros. can make it but like any studio they have research that tells them whether or not they'll make their money back. And that's what we've been told: That it's just not there. So my duty, because I wanted this movie made from the minute our show got canceled, is to a) do it before I'm 40; and b) to prove to Warner Bros. that there is an audience."

"I would be down with doing a Web series. I think, and I don't speak for anyone else but myself, but I think that they want it grand because it is deserving of being on the big screen."

At this point, Kristen, I don't think Veronica Mars beggars can be choosers. Those fans will settle for any re-incarnation of their favorite Neptune private eye, even if she was starring in a 20-minute documentary about reggae.