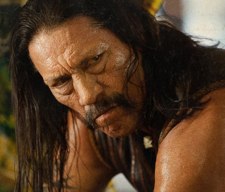 Within the first five minutes of Robert Rodriguez's Machete, his cheeky, freewheeling return to exploitation homage, there's a car crash, a mutilation, a decapitation, a baker's dozen deaths by blade, a naked lady, and a Steven Seagal sighting. And that's not even mentioning the clamshell cell tucked up the naked lady's hoo-ha. Then the film ramps right up to a pseudo-vintage, sprocket-skipping title sequence that promises the most deliciously random cast in recent memory: Jessica Alba AND Lindsay Lohan, Seagal AND Robert De Niro, a Nash Bridges reunion AND a Danny Trejo leading-man coronation. Though the film can't reasonably maintain this 10-gags-a-minute trajectory, it sure does try. Forget modulation, nuance or storytelling, this is a movie that hits hard from first to last, no questions asked or logic followed.

A real movie born from a celebrated fake trailer featured in Rodriguez's Grindhouse collaboration with Quentin Tarantino, Machete exhibits the improvisatory hustle of an elaborate idea incidentally conceived. For the most part, its full-throttle handling of a half-assed conceit delivers enough laughs, chop-socky action and blithe, eye-gouging gore to justify all the noise. Yet despite an aptly blunt stab at social satire, it never really bothers to make sense of its bluster. As the aphoristic protagonist himself might say: Machete don't mean nothing -- Machete just is. A film this playful and brazenly inconsequential should at least inspire invention at the margins -- a nifty action sequence here, or a nicely framed shot there -- but Rodriguez, unlike his compulsively experimental compadre Tarantino, seems disinterested in anything but entertainment delivered fast, cheap (or in this case, the expensive simulation thereof) and out of control.

Hatchet-faced character actor Trejo plays the titular blade-wielder as a strong, silent type with a long black mane, walrus mustache, and long list of grievances. A Mexican lawman outlawed by corruption and widowed by a diabolical kingpin named Torrez (Seagal, having the time of his life with a bad accent and Wayne Newton wig), he struggles to make a living as a day laborer across the border. He cuts a mean figure but is effectively invisible until Booth (Jeff Fahey), an American political operative, hires him to assassinate Sen. John McLaughlin (De Niro), an anti-immigration agitator.

But it's all part of a frame-up meant to inflame anti-Mexican hysteria, which drives Machete to seek justice and revenge, and to join forces with an underground network that supports and champions illegal workers. Luz (Michelle Rodriguez) clandestinely runs the network from a taco truck, where she's pursued by Sartana (Alba), an ambitious Mexican-American immigration official. Machete simplifies matters by teaming up and bedding both women--he's a lawman and a rebel, after all--consolidating the struggle against isolationism to fight for what's right, if not necessarily legal. For Rodriguez, satire is mostly an excuse for wish-fulfillment -- heroic Machete cuts across all political distinctions -- but it injects the film with a welcome contemporary relevance. "We didn't cross the border," stumps Alba. "The border crossed us."

There's more to the plot -- the racist-capitalist conspiracy extends back across the border to Torrez and enlists a militia of Texas yahoos led by Von (Don Johnson), a trigger-happy Elvis look-alike -- but Machete works best as an accumulation, not a progression. See Machete kill with a sword, then surgical knives, then garden sheers, then a meat cleaver, then a meat thermometer, then a shard of window pane; see him behead, obliterate, slice in half, disembowel and repel down the side of a building with an intestine; see Alba work a laptop in the shower, see Rodriguez in a leather bikini top, see Lohan in a nun's habit, then see them all with pistols a-blazing.

Rodriguez may have 1970s B-movie nasties on the mind, but the film that Machete most resembles is Tim Burton's ode to 1950s sci-fi cheapies, Mars Attacks! Marshaling big studio dollars to replicate movies shot on the cheap, both films ask the audience to enjoy from an ironic remove, laughing both at and with the silliness, evoking bad movies by making one. As intentional camp goes, Burton's is the bolder film, risking a fuzzier line of intentionality and looping its own critical drubbing into a full circle homage. But even if nothing in Machete can equal the surreal brilliance of Sarah Jessica Parker's head stitched atop a dog or Tom Jones singing "It's Not Unusual" to rapt woodland creatures in Mars Attacks!, there are gags and sequences that come close enough. Cheech Marin shows up as Machete's brother, a foul-mouthed priest who spies on his parishioners via a cross-shaped bank of security monitors. "I absolve you of all your sins," he tells his brother. "Now get the f*ck out."

In the film's most inspired sequence, Mexican day laborers rally together, bat-signaling via text message, to take up arms, shovels and rakes against their oppressors. Pimped-out, missile-mounted old Chevys and Pontiacs bound into battle with hyperbolic hydraulics while Machete rides a high-handled hot rod, an army of stereotypes reclaimed as exuberantly bad-ass, absurdly defiant. Rodriguez hasn't the mind to make much of it, but the spectacle still serves.