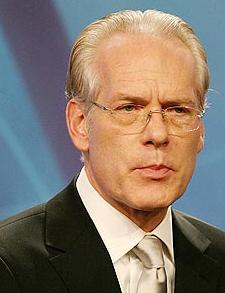 Project Runway's most indispensable fashion guru, Tim Gunn, may have interacted with FBI head J. Edgar Hoover at his most "stylish" moment, shall we say. Gunn, whose father George William Gunn was Hoover's ghostwriter in the '50s and '60s, speculates in his upcoming book Tim Gunn: Gunn's Golden Rules that he met Hoover once when he was dressed as I Love Lucy legend Vivian Vance. To read the startling, not-so-Desilu details, carry on through.

According to Gunn, he's not positive he met Hoover in drag, but his suspicions sound pretty valid.

One thing happened that made me wonder if maybe [my father] did know something about Hoover's supposed love of dresses and wigs. My sister and I used to take the FBI tour once a year. It was a big deal in D.C., and we never missed it. One year, 1961, when I was eight, I was on the tour and my father asked me if I'd like to meet Vivian Vance. According to Helen Gandy, Hoover's secretary, Vance was visiting Hoover, and she said she'd be happy to meet us.

I was a rabid I Love Lucy fan and was beside myself with excitement.

"Ethel Mertz is here?" I screamed. My father smiled and took my sister and me into Hoovers' office, where I shook Vivian Vance's hand and chatted with her. I was thrilled.

Years later, I was reminiscing with my sister about the meeting, and suddenly I realized something. "Does it seem odd to you," I asked her, "that when we met Vivian Vance in Hoover's office, Hoover wasn't there?"

I've since looked at photos of both Hoover and Vivian Vance from that period of time, and the similarities are rather eerie...

I've called some Vivian Vance experts, including Rob Edelman and Audrey Kupferberg, who wrote Meet the Mertzes: The Life Stories of I Love Lucy's Other Couple; none of them knew of any meeting between Vance and Hoover.

I'm not saying at the age eight I definitely met J. Edgar Hoover at his office in the FBI wearing a dress and makeup, only that I strongly suspect it. My mother says I'm crazy, but she wasn't there.

One thing left out of the book: whether Nina Garcia is equally convincing as a cantankerous William Frawley.