Ben Mendelsohn on Animal Kingdom, Crafting a Monster, and the Upside of Tension 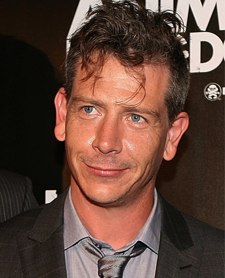 There are bad guys, and there are bad. Guys. Veteran Australian actor Ben Mendelsohn plays the latter in Animal Kingdom, the Sundance-winning, Melbourne-set crime drama currently wowing moviegoers in limited release. Much of that reaction has focused on the quality of the film's evil double-headed, awards-worthy hydra, with the terrific Jacki Weaver smiling and snarling on one side and Mendelsohn -- as bipolar (or monopolar, really) robber ganglord Arthur "Pope" Cody -- on the other. As Mendelsohn candidly and readily admits, it was not a beast you wanted to mess before or during the grueling Kingdom shoot.

Everyone's got such an interesting back story about how and when they got involved in this film. When did you meet [writer-director] David Michôd?

I met David... I suppose it's eight years ago or something. We kind of knew each other socially, and at one point he said, "Well, I've been writing this thing and I'd like for you to have a look at it." I was like, "Yeah, OK." It can often be an unfortunate bridge to cross with people. And I had a look at it. There was some really strong stuff in there, but it really changed quite a bit over that period. It's an incredible thing to watch someone profoundly skill up. David's a really dark horse. You don't expect the level of insight and ingenuity. He's a dark horse.

"Dark horse" in what ways?

Well, David appears to be a very sweet kind of guy, but he has got... [Long pause] You can't guess at the tenacity and the ability to get things done -- the ability to read people and transpose as well as he does. Just how f*cking smart he is. That incredible barometer of feeling. I mean, the reason people go apesh*t over this film is because of the intensity of feeling that's there. It's got a lot of brilliant cinematic stuff there. David did all that.

He said that when you guys sat down to work this film out, it was... difficult.

Yeah, because he got a smack from me when we went to rehearsals. I was on the back end of a very long stretch of work, and this thing had been around for long stretch of time in one way or another. Anyway, we came to do it, and I think the first thing David wanted to do was the prison scene with myself and Luke Ford and Jacki Weaver. We had a read, and I said, "What the f*ck are we doing? What are we doing this for? We don't even know anything yet. What the f*ck are we even attempting? This is f*cking bullsh*t. You and me, we need to talk." And so we went away and... Look, people who've known me for a while know I can be kind of obstreperous. It's not a highly personalized thing; it's just kind of Aussie speak. So we went away and we went over everything because you don't want to f*ck a character like this up. You don't want him contactable. You don't want to feel like you can contact or even sway this person. Do you know what I'm talking about?

I do. But of course he's always telling Darren and J, "You can talk to me." Does Pope really believe that?

Is his frustration that he doesn't think it'll happen? Or that it hasn't happened yet?

I would think to a degree he would go from that to being outraged. He wouldn't be able to see himself with any accuracy. I don't know that he'd be able to describe another person to you with any accuracy because his lens is such a... kaleidoscope, really. He's constantly looking through these shifting shapes. I don't think he can describe anything with any objective accuracy. So when he's doing something like reaching out to them, he's trying to effect something, on one hand. On the other hand, it's all in there. "You can talk to me, you know?" But the minute someone looks at you like that, it's the last f*cking thing you want to do. Because it involves getting close to him in some way. And he's going to take offense at something or be suspicious about something or control you more.

And obviously he's having a hard time adjusting to his roles in the family. He's having difficulty being a son, being a brother and, of course, being a father figure, in a way. How did those different sides of the character interface with each other?

I don't think of them as different sides at all. I just think of them as the one thing flipped over and over again. And that's... It's hard to even... [Pause] I'm not trying to be withholding in this, but it's hard to even put it into words what it is because it's such a felt thing. Part of what we did to get to that feeling was talk about [how] David was into the idea that [Pope] was very confused and very damaged. That was the template he wanted to start with.

On top of that you just kind of add in some sort of family dynamics. The fact that there's no discernible father figure around, and he would have had to step into that breach. And he's a guy losing his potency in terms of being the breadwinner. Traditionally he would have been able to be the top of the criminal tree, too, because armed robbers used to be. They're not anymore; it's a very hard thing to make a living at. Technology, etc. caught up. Now it's all drug dealers. So it's a bit of the old war veteran in there, too: "You f*cking kids of today." There's a lot of doorways in to playing him, and one of them was also a horror character.

You want to know the best single influence? There's a shot at the end of Taxi Driver where it kind of goes all multi-colored. And it's really weird, it's really unsettling. And it's obviously drawn from horror genre stuff. But all you see is a person's face and them going through something. In terms of Pope, what I wanted to try and get was the feeling that if you got noticed by this person, that was not a good thing. That's why it was an idea that appealed to me a lot.

Where did the name Pope come from?

It comes from the idea that was probably quite taciturn and quiet, and into that taciturn space people probably assumed he was kind of wise and capable. Sort of like Motorcycle Boy from Rumble Fish -- that idea of a capable kind of competent, protective dispenser of wisdom. And there is a wisdom and an ability somewhere in him. But under the circumstances in which this film unfolds, you see that deteriorate. The fall of the House of Usher, if you like.