Hollywood Ink: Shia LaBeouf Gets a Proposition to Work with John Hillcoat 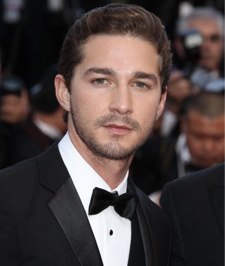 · Say what you will about Shia LaBeouf, but the man has no shortage of great directors who want to work with him. The latest? John Hillcoat. The pair tried and failed to bring The Promised Land to the big screen (which was also set to co-star Ryan Gosling, Paul Dano and Scarlett Johansson among other heavy hitters), but now they've both got their eyes on Triple Nine. The film would follow a "group of crooked cops planning a major heist who realize they must shoot one of their own in order to get away with it." Not surprisingly, LaBeouf would play the "one." No deals are in place yet -- shocker! -- but if this ever does come to fruition perhaps Hillcoat can coax Gosling into playing one of the other cops. Either him or Guy Pearce, right? [The Wrap]

· Our long national nightmare is over: The Justin Bieber 3D Panoply of Cynicism has found a director. Step Up 3D director John Chu will take the reigns from the departed Davis Guggenheim. The first note to Chu from Paramount: Don't throw water at the 3D cameras. [Deadline]

· And speaking of cynicism... have you heard Warner Bros. is making a Bugs Bunny reboot? Because they are. Elf screenwriter David Berenbaum is on board and Warner Bros. is hoping the film will be a mix of live action and CGI. Any guesses on the overtly sexual tagline they'll come up with for this one? [Deadline]

· This writes itself: Universal almost sunk Battleship back in June because its budget has soared past $200 million. Hey, Rihanna's hair-colorization costs more than you'd think! [THR]

· Jeffrey Dean Morgan has signed on for The Courier, an action film about... a courier. [Deadline]

· There was a time when Michael Vartan was almost famous. Alas, the best laid plans of mice and men go oft awry. Anyway, he's going to co-star with Zoe Saldana in Columbiana, an action film written by Luc Besson and directed by the guy who did Transporter 3. [THR/Heat Vision]