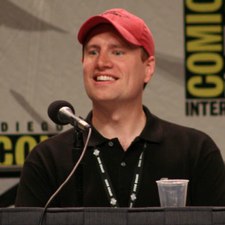 Creative differences happen all the time in Hollywood, but it's rare to see a statement acknowledging them as candid as the one recently released by Marvel head Kevin Feige. While confirming rumors that Edward Norton would not reprise his Hulk role in the Marvel superhero mashup The Avengers, Feige implied that Norton was something less than a team player. Tonight, I asked him whether he regretted his candor.

"We have made the decision to not bring Ed Norton back to portray the title role of Bruce Banner in the Avengers. Our decision is definitely not one based on monetary factors, but instead rooted in the need for an actor who embodies the creativity and collaborative spirit of our other talented cast members. The Avengers demands players who thrive working as part of an ensemble, as evidenced by Robert, Chris H, Chris E, Sam, Scarlett, and all of our talented casts. We are looking to announce a name actor who fulfills these requirements, and is passionate about the iconic role in the coming weeks."

If Feige had to do it over again, I asked, would he have been quite as honest?

He hesitated before answering. "Yeah. I didn't think I was being all that candid, frankly. It's something that I think needed to be very clear [about]."

There was some fanboy friction when the news was announced, but Feige said that wasn't the main reason he wanted the statement to be so truthful: "No, no. It's because we were talking to other actors. I didn't want them to think they were in a contest."

In the days that followed that statement (and the days that preceded tonight's unveiling of Mark Ruffalo as Norton's replacement), Norton's agent issued a blistering response complaining that "this offensive statement from Kevin Feige at Marvel is a purposefully misleading, inappropriate attempt to paint our client in a negative light." Norton himself was more conciliatory, stating "I am very sincerely grateful to Marvel for extending the offer and even more so for giving me the chance to be a [part] of the Hulk's long and excellent history." Feige would prefer to concentrate on the latter response.

"I think his statement afterwards was great," he said, "and there's no bad blood."