Was there any talk that maybe if this movie did well, there could be a Henry Huggins spin-off?

I've heard rumors, but as an actor, you have to try your best to ignore those. I'd get excited way too quickly.

How well did you know Selena before this movie?

I knew her through one of her friends on Wizards of Waverly Place, Jennifer Stone, so I'd actually gone to go see a movie with her and we'd done promos together. I was pretty familiar with her, and I remember texting her when I got the part and she was stoked. She was already shooting by the time I got up there, so it was great that we didn't have to force chemistry, that we already had that friendship with each other. 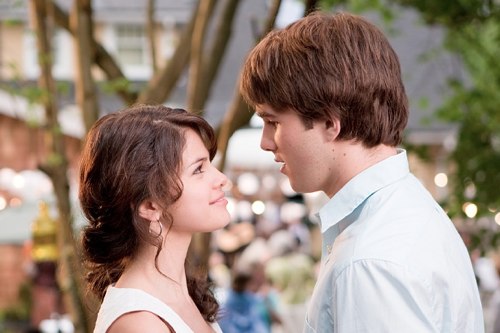 When you come from a family of actors like yours, does it give you an appreciation for older movies? I was reading that you've seen every Marlon Brando movie, and I wonder if that's true for most actors your age.

Because of my heritage, I think I have an appreciation for the golden age of acting, and I got introduced to those films at an early age. My dad wanted to watch them and my mom was really adamant about me seeing them. I didn't know anything about them, so I was completely open to it, and the first time I saw A Streetcar Named Desire, I was hooked.

What was it about that performance that really struck you?

Everyone says that acting changed when Marlon Brando put Stanley Kowalski on Broadway in A Streetcar Named Desire. I didn't get to see that, but to see that performance onscreen, it's like watching the most iconic thing in the world. He changed acting forever, and you look at that, and you strive to be the kind of actor who could start a revolution like that.

Having worked since you were little, did there come a time where you had to change your technique? When did you go from being a kid who just read lines to a kid who was really exploring how to act?

It's all about the characters you play and the choices you make while you're acting. You have to be open to anything; for example, if a director wants you to go a different way -- a way you probably would not choose yourself -- it's up to you whether you decide to take a chance and trust the director or choose to not listen to them, which is just closing yourself off so that you don't learn anything new about yourself as an actor or about the character you're playing. I think that's something every actor needs, to trust that your director knows what they're talking about so you can explore every aspect of yourself as an actor.

You booked your first commercial when you were five. Do you remember what that was like?

All I remember is that I was playing a kid with the rest of my family -- my mom, my dad, and my sister -- and we were going around on a merry-go-round in the rain, which they hadn't planned on that day. I just remember wondering why I was there. I was still a little out of it.

At what point in your acting career did it dawn on you why you were there?

I stopped acting when I was six because my dad saw me crying in the audition room, and he said, "There's no way [I'm putting you through this]." Then, when I was fifteen, I booked Zeke and Luther after kind of starting to act professionally, and I think after that, I felt like, "I can't believe this." You can't really say you're a professional actor until you book a gig, and I think after Zeke and Luther, I was getting paid to do what I wanted to do.

Two of my friends are producers on Zeke and Luther, and I went to one of them to find out what I should ask you. So here's his question: "What do you think of the fact that when you type 'Hutch Dano' into Google, one of the first suggestions it makes is 'Hutch Dano shirt off'"?

You know what, someone showed me this. [Laughs] It's funny that you brought this up, because one of my friends showed me this. I was like, "Really?" I don't think about things like that, so I would say when my friend showed it to me, I became immediately uncomfortable. That was definitely my reaction. [Laughs]