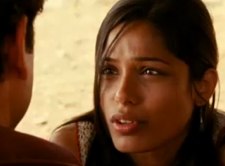 An international trailer for Julian Schnabel's Jerusalem orphanage drama-meets-political intrigue Miral has arrived online, and it looks... intense. There are jets, guns, riots, beatings, personal showdowns, romance and more, all under the timeline-jumping eye of Schnabel's shaky-cam. But none of the imagery really gets to the essence of the Israeli/Palestine conflict quite the way Tom Waits does. On second thought...

I thought the trailer was doing just fine without laying a purposely dramatic, gravelly American dirge beneath it: Freida Pinto gets fierce as the title character, a Palestinean orphan who grows up to become involved in the Middle East conflict, which itself involves falling in love with an activist and butting heads with the orphanage founder (Hiam Abbass). OK, so the dialogue was on-the-nose, but narratively it's ambitious stuff -- more "historical epic" than "historical portrait." indeed, the film is based on a novel by Rula Jebreal, and the trailer explicitly spans decades of regional angst, struggle and violence. So give it (and Schnabel) a little credit for squeezing the basics into 115 seconds.

But then... Waits. Let me ask the Waits fans in the house if you'd be just fine going the rest of your life without hearing "Down There By the Train" linked to this? If everyone onscreen has "taken the low road," as the song (or at least the use of the song) implies, why take their passions as seriously as Schnabel seems to intend? Or is it just a big, decontextualized emotional kicker? Like, a choral version of "Creep" at least sort of carries The Social Network's emotional and intellectual water. I don't get this one so much, though.

Anyway, Tom Waits aside, this looks pretty good. Don't screw it up, Harvey!