REVIEW: Is Inception This Year's Masterpiece? Dream On 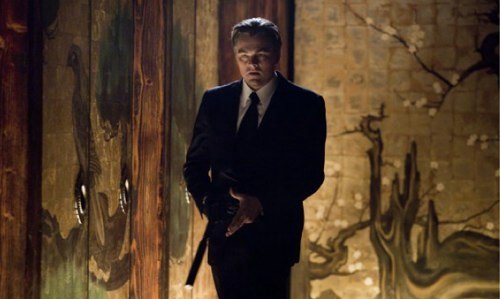 If the career of Christopher Nolan is any indication, we've entered an era in which movies can no longer be great. They can only be awesome, which isn't nearly the same thing.

In Inception, Nolan does the impossible, the unthinkable, the stupendous: He folds a mirror version of Paris back upon itself; he stages a fight sequence in a gravity-free hotel room; he sends a train plowing through a busy city street. Whatever you can dream, Nolan does it in Inception. Then he nestles those little dreams into even bigger dreams, and those bigger dreams into gargantuan dreams, going on into infinity, cubed. He stretches the boundaries of filmmaking so that it's, like, not even filmmaking anymore, it's just pure "OMG I gotta text my BFF right now" sensation.

Wouldn't it have been easier just to make a movie?

But that urgent simplicity, that directness of focus, is beyond Nolan: Everything he does is forced and overthought, and Inception, far from being his ticket into hall-of-fame greatness, is a very expensive-looking, elephantine film whose myriad so-called complexities -- of both the emotional and intellectual sort -- add up to a kind of ADD tedium. This may be a movie about dreams, but there's nothing dreamlike or evocative about it: Nolan doesn't build or sustain a mood; all he does is twist the plot, under, over, and back upon itself, relying on Hans Zimmer's sonic boom of a score to remind us when we should be excited or anxious or moved. It's less directing than directing traffic.

Nolan's aim, perhaps, is to keep us so confused we won't dare question his genius. The movie opens with Leonardo DiCaprio being washed up on a beach somewhere -- mysteriously, there are two little blond children cavorting around, though we can't see their faces. Then some Japanese soldiers drag him into a menacing-looking seaside castle nearby. Then he sits down at a table, opposite some mysterious old guy, and proceeds to eat some gruel. What, you might ask, is going on here, as bits of runny porridge drip from the haggard-looking DiCaprio's lips? You're supposed to be perplexed -- it's all part of the movie's puzzly-wuzzly structure.

Before long we learn that DiCaprio's character is an "extractor," meaning he's a skilled craftsman who can enter others' dreams to draw out valuable information, useful, particularly, in corporate espionage. His name is Dom Cobb -- which is, I guess, better than being called Com Dobb -- and not only does he have the ability to enter others' dreams; he actually builds those dreams, with the help of his number-two man, Arthur (Joseph Gordon-Levitt), plus an architect, who had better know what he or she is doing. The architect working for Cobb at the beginning of the movie (he's played, all too briefly, by Lukas Haas) meets a bad end after installing the wrong kind of shag carpeting in an important dream. Perhaps these dreams need interior decorators, too, to prevent future faux pas, but let's not get off-track.