Hollywood Ink: Does Lego: The Movie Have Cloudy Future? 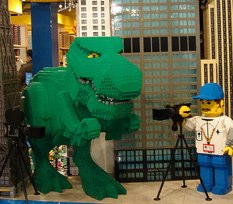 · Cloudy With a Chance of Meatballs co-directors Phil Lord and Chris Miller are in "final negotiations" to take on Lego: The Movie -- or whatever it's being called these days. The duo won over both the Danish toymaker and its studio partners at Warner Bros. with their pitch, a proposal leaning heavily on their success last year with Cloudy. Once confirmed, they'll take it on after completing work on developing 21 Jump Street. [THR]

Miramax dumps Katie Holmes in the January cold, a '60s TV series may get a revival, and more Hollywood Ink after the jump.

· Miramax is still for sale, but in the meantime, Disney's shuttered mini-major will half-ass a release for Don't Be Afraid of the Dark, tossing the shelved Katie Holmes/Guy Pearce thriller in the Jan. 21, 2011, release frame. The studio does reportedly like the R-rated film; this isn't so reassuring. [Deadline]

· The long-discussed/rumored screen adaptation of The Man From UNCLE is the subject of additional speculation today, with the latest talk suggesting that Warner Bros. is escalating its search for a director. Doug Liman and David Dobkin are among those who have fallen out to date. Ridley Scott will probably be attached before long, naturally. [LAT]

· Slow clap for Mike Fleming's turn of phrase at Deadline: "Jack Abramoff has been sprung and works for a kosher Baltimore pizzeria. He might be up to his eyeballs in dough, but a lack of money due from Metropolitan has prompted the makers of Casino Jack to reclaim the film." [Deadline]