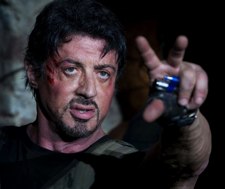 The last few weeks have seen a bit of back and forth about how Lionsgate would release The Expendables; to hear producer Avi Lerner tell it, test audiences would have at least some influence on the rating depending on their reactions to PG-13- and R-rated cuts. But more evidence emerged today that the film will arrive in the theaters the way Sylvester Stallone intended. And I think we all know what he intended.

The latest batch of MPAA ratings have The Expendables rated R for "strong action and bloody violence throughout, and for some language." On the one hand, that rating's not really news; Lionsgate said as recently as last week that it always planned to release the mercenary action thriller with an R-rating. (And they've already began marketing it as such.) And technically, Lerner can still maintain his plan to test away with whatever sanitized cut he wants. On the other hand, the obvious catch now is that there officially is no PG-13 version to test, unless it's coming later -- which could always happen. But with the film opening Aug. 13, I'm not sure how much later they want to test a movie that's already been delayed months and has its audience pretty much set to begin with.

Anyway, there's always time to screw up a perfectly good thing, so I'll just append a "developing" here and check back in if/when the 'Gate loses its nerve. But don't count on it.