Friday Night Lights' Zach Gilford on His Big Episode, That Facebook Campaign, and the Series Finale

What is that like? When you come in and do a few episodes of a season, are you like, "Wait, what have you guys been doing with Riggins?"

[Laughs] Yeah, a little bit. It's another way I like to liken ourselves to Lost -- they get their scenes sometimes and don't get to read everything else. As much as I love the show, I watch it as a fan and I've continued to after I left. So I come on and I know what's going on with me, but I don't want to read the other stuff because I want to watch it and see it as a fan. I don't want the surprise ruined for me.

So what is it like to watch yourself in an episode like the big one you just had?

I don't know how to explain it. It was emotional shooting it, and I don't even know why, to be honest. Some of those things just struck [a chord] with me, I guess. Then when it aired, I watched it with my girlfriend and my roommate, and I thought it turned out great. I am my own worst critic, so I definitely was like, "Oh man, I could have done that better," or "I wish they'd used that other take," but it was definitely the best script we ever had. The writer did a phenomenal job, and it looked like a movie script.

Very rarely do our writers put in songs that they want to be playing at a certain point, but he had done that. At the actual funeral, he had wrote that he wanted to have this Bon Iver song, so that's what was playing in my head the whole time I was there and it was the most perfect song ever, but in post-production, it turned out that the singer had gotten mad with the way things worked out with his song on the Twilight soundtrack, so now he won't put anything in movies or TV shows anymore. We couldn't get the rights to it, so I was watching the episode like, "Wait! Where's the Bon Iver song?" [Laughs] It's weird when you've shot something, because you can't just sit there and be an audience member. You've seen every single aspect of it, and you know these people not as just their characters but as actual people. 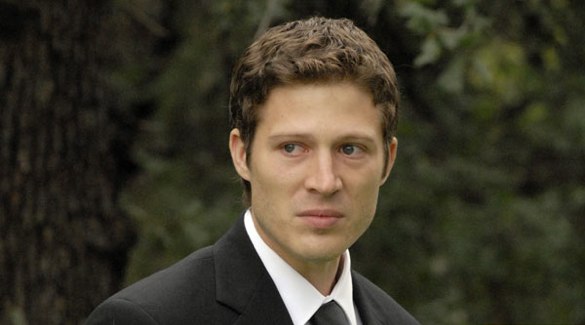 Part of why this episode worked so well as a viewer is because we've known Matt for so many years before this happened, so the moment plays stronger. I wonder what it's like to act such heavy scenes opposite actors that you've worked with for so many years, but maybe never played this kind of material with before?

I think it actually makes it so much easier -- you feel really safe. Like I was saying, it's hard when you watch the show to not think of them as real people, but at the same time, when you're actually doing those scenes, it's easier to think of them as those characters. I'll never forget this weird experience when I was giving the speech at [Saracen's] father's funeral, and I looked out over the crowd and it was all the cast, all the people I've worked with for so long. It just struck a chord. I don't even know! Those relationships that we have with each other are so established that it's just second nature now. Anytime I have to do anything with Aimee or Jesse [Plemons] or Taylor [Kitsch], I don't even have to think about it -- it just happens. It helps that we all get along really well. It's not a set where everyone hates each other; we're all genuine friends.

None of that matters. It really comes down to when I sit down and watch it and I'm like, "Yeah, I'm proud of that," or "Ah, I screwed that up." I'm really just going for the experience I have when a) I'm actually doing it and b) when I sit down and see the finished product. It can be manipulated so much by that time, for better or for worse, but I've found on Friday Night Lights, it's usually for the better. All that other stuff is so out of your control, and I think I've learned that the most with this show. As much as people love it and hype it up, we can't get people to turn it on. There's nothing you can do to make someone watch something. All you can hope is that people enjoy it.

Is it gratifying, though, to hear that there's this groundswell for your performance?

It's super-flattering and nice. I'm so thankful for everything everyone said. It's also cool to be a part of something that sparked more energy back to the show again. The first season, everyone wrote and talked about our show, but no one really turned it on, so I think I reached the point where I was like, "Well, no one's listening to me, so I guess I'll just keep it to myself." And now an episode came up that's making everyone really excited again. They feel like they need to tell people to watch this. It's exciting.