QUACK-QUACK! Where to Find This Week's Awesomest Critical Skirmish 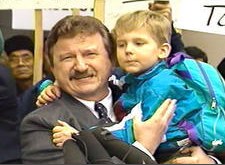 So there's this documentary called Burzynski opening this week in New York City. I haven't seen it and had never even heard of it before last night. But oh, what an introduction at The Village Voice, where critic Ella Taylor -- perhaps still rinsing bile residue after her Sex and the City 2 takedown -- absolutely trashed the film, its subject and its director. And then came the defenders trashing Taylor. Wait -- what the hell is a Burzynski again?

We're talking Stanisław Burzyński, a Polish-born doctor and biochemist whose experimental cancer treatments have resulted in attacks by the FDA and a fraud trial after claiming reimbursement for non-approved administrations of his "antineoplaston" therapy. (An hung jury agreed Burzynski was guilty but couldn't vote to convict him because of his patients' sincere faith in his methods.) But he's reportedly seen more than 6,000 patients in over three decades of practice at his Houston clinic, and his struggle to treat them emerged as a subject of interest for the first-time filmmaker Merola.

Just another documentary, right? An earnest indie toward which we can quietly nod in approval as it shuffles off to TV and DVD oblivion? Not quite, writes Taylor in a review classically headlined, "QUACK-QUACK Goes Burzynski":

Eric Merola, a former art director of commercials, is either unusually credulous, or doesn't understand the difference between a documentary and an advertisement, or has an undisclosed relationship with the subject of his allegedly nonfiction first film. Consciously or not, Merola is shilling madly for Dr. Stanislaw Burzynski, a Polish-born physician who has run afoul of federal authorities and shown up on several quackometers for his claim to have cured scores of patients of a lethal brain cancer with a treatment derived from animal urine. [...] Burzynski violates every basic rule of ethical filmmaking: Merola interviews only Burzynski's supporters, produces no patient records other than the doctor's own, and offers no credible proof of the drug's success and no data about its side effects, even as he slams chemotherapy and radiation. Who's the bigger charlatan -- Burzynski or Merola -- and why is this conspiratorial rubbish being released into theaters?

Dammmnnn. That was enough to get the totally awesome Team Burzynski out in force in the review's comments section:

· I think poetic justice for you would be that you contract cancer and die a torturous chemo induced death. I know that's mean spirited, but so is your review.

· Ella, Quite simply you're pathetic - and I'm not sure how you live with yourself. My own mother was cured by Dr. Burzynski after being diagnosed with advanced stage Non-Hodgkins Lymphoma almost 20 years ago. [...] I would love to know whether you are just an idiot or a sellout. For the benefit of your soul and my peace of mind, I hope you're just a confused idiot.

· Quack-Quack Journalism Ella Taylor! For Shame! Ms. Taylor's research skills are minimal; her credibility is non-existent. She should stick to evaluating the undemanding films like Sex and the City 2.

· I enjoyed this movie immensely!. This is much better than the rubbish Village Voice usually says is great like Zombies March on Williamsburg. Did the reviewer even see the Burzynski movie? The movie does not mention animal urine one time.

And, finally, a word of self-defense from Eric Merola himself:

Animal urine? Really? Ella, why not just state he uses dandelion stems, or perhaps used tires? Never, has he ever used animal urine in the treatment of human cancers -- ever. Did I mention ever? In the 1970's and early 80's he extracted his peptide discovery from human blood and urine, until he was able to synthesize his Antineoplastons from scratch in his laboratory. Any use of any bodily fluid has been absent from his treatment since the early 1980's. [...] what [sic] doesn't Ella watch the films she reviews anymore? Have the people who pays [sic] her salary not caught onto this yet? Why is this movie review based on crystal ball fortune-telling rubbish even being published? Don't be a robot, decide for yourself, it just might save your life: www.burzynskimovie.com

Well, I'm glad we got that straightened out. Anyway, good show, folks, keep it coming.