Hoo boy. Movieline's own Stephanie Zacharek might have alerted you to the appalling displeasure(s) of Sex and the City 2, but while she did give it a record-low rating for the site, there were people who appear to have despised the film even more. May they all receive phone calls from Sarah Jessica Parker! Meanwhile, here are a few of the most spectacular hate-geysers on the scale from "bitterly angry" to "thoroughly corrosive."

9. "I get that 'dignity be damned' is a mantra for writer-director King, who wants to let us know, every five minutes, that he just loves women. But it's one thing to create a group of BFFs who have become, in their way, post-millennium pop female icons as beloved as Mary Richards and Rhoda Morgenstern were in the late 1970s. It's quite another to drag them well into middle age, dress them like mutton passing as lamb, and lumber them with female troubles culled straight from the mommy or single lady blogs." -- Ella Taylor, The Village Voice

8. "The only thing memorable about Sex and the City 2 is the number two part, which describes it totally, if you get my drift. Everything else in this deadly, brainless exercise in pointless tedium is dedicated to the screeching audacity of delusional self-importance that convinces these people the whole world is waiting desperately to watch two hours and 25 minutes of platform heels, fake orgasms and preposterous clothes. It is to movies what fried dough is to nutrition." -- Rex Reed, The New York Observer

7. "Miranda and Charlotte toast all the women out there who somehow raise children without the aid of a full-time, live-in nanny. When Marie Antoinette did this, the people tore down the f*cking Bastille. When our Sex and the City girls do it, they slurp it up like box rosé and Häagen-Dazs." -- Walter Chaw, Film Freak Central

6. "Miley Cyrus [...] pops up ostensibly to play Miley Cyrus but really as a sop to that more callow generation of women who might just look at this Gang of Four and wonder, 'Like, who are these middle-aged narcissists, and did they used to be somebody?'" -- Rick Groen, Toronto Globe and Mail

5. "Before leaving Abu Dhabi, the increasingly loathsome quartet become involved in a mishap that ends with Samantha (now effectively reduced to a walking hormone joke) in the middle of a busy town square, holding up a package of condoms, thrusting her hips and shouting, 'I have sex!!!' as the Muslim call to prayer is sounded. Sex and the City 2 won't win any awards (save for a few Razzies), but it could become an effective inspirational video for suicide bombers -- provided they can endure the film's two-and-a-half hour running time, of course." -- Thomas Leupp, Hollywood.com 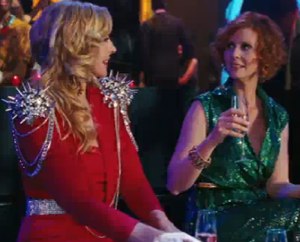 4. "King devises an Eastern-Western sisterhood subplot which features a group of burqa clad women coming to the foursome's rescue at a point when even they should be appalled. And that's before they disrobe to reveal their own designer duds and Suzanne Somers tomes! If cartoons of Mohammed have incited jihad, Sex and the City 2 may add nukes to the equation." -- Laura Clifford, Reeling Reviews

3. "A veil 'cuts back on the Botox bill!' chirps Samantha. Har. In Abu Dhabi husbands can legally beat their wives -- and Carrie thinks this place is Oz, a cure for her boredom with a zillionaire husband who, she complains, eats too much takeout. (She won't cook because she's more 'Coco Chanel than Coq au vin.' Waiter: one divorce, please)." -- Kyle Smith, NY Post

2. "It would have been more merciful for writer-director Michael Patrick King to have rented Carrie, Samantha, Charlotte and Miranda out to the Saw franchise, or to Rob Zombie, so we could watch them get shot in the head or skinned alive by Arkansas rednecks. Instead of that, we get something that's truly sadistic: the SATC girls as haggard specters, haunted by their freewheeling '90s past and stupefied by the demands of work, marriage and/or motherhood." -- Andrew O'Hehir, Salon

1. "SATC2 takes everything that I hold dear as a woman and as a human -- working hard, contributing to society, not being an entitled cunt like it's my job -- and rapes it to death with a stiletto that costs more than my car. It is 146 minutes long, which means that I entered the theater in the bloom of youth and emerged with a family of field mice living in my long, white mustache. This is an entirely inappropriate length for what is essentially a home video of gay men playing with giant Barbie dolls." -- Lindy West, The Stranger