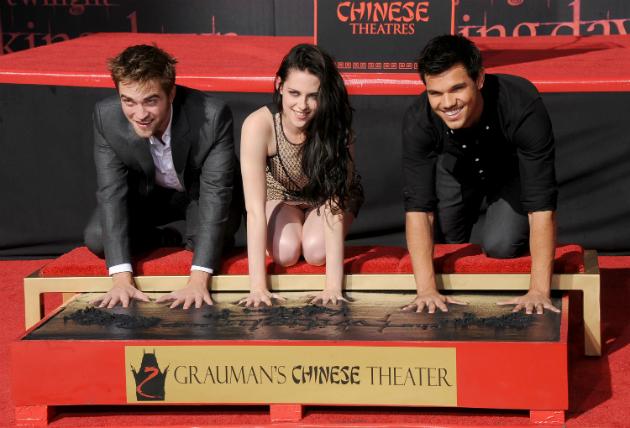 Stewart's changed appearance in the film, during which she becomes gaunt and sickly, was strictly digital.

"Everything was sporadically shot. To do that [without visual effects] we would've had to shut down production for a couple months while I lost the weight or gained it back, whichever we did first," she said. "That it does make you feel a little bit like, 'I hope you guys do a good job.' It's sort of like, 'I can't do this part.' It can ruin you if you look ridiculous. But those [CG] guys are amazing at what they do."

Lautner's final day of shooting on the series paralleled his character's emotional goodbye.

"I knew filming the last scene was going to be tough, but it was more emotional for all of us than we expected," Lautner said. "It didn't help that my very last scene was with Kristen -- it was with Rob as well, but he comes in at the end and breaks it up -- and it was the last dance between Bella and Jacob toward the end of the wedding. Jacob's saying goodbye to Bella, and she's off to her honeymoon, and he realizing that it's over, everything I've been working for is over, and it's really time for him to move on and realize that. It's an emotional scene, we're saying goodbye to each other pretty much and that was the very last scene we filmed together so it didn't help the situation. I remember when we finished, Kris and I looked at each other. I don't think we had anything to say. Because the emotion from the scene was overwhelming us, and the emotion of the situation on top of that, it was tough, but it was a really special moment, and now when I watch that scene I have a lot of great memories."

Post-Twilight seems to be a good time for soul-searching.

Stewart says she's ready to assess her future now that the Twilight franchise is wrapping up. "It's the first time in a long time that I haven't worked, or haven't known what I was going to be doing, and I don't want to rush it because I want to have time off and figure out what I'm interested in. Not to say that I'm just going, going, going all the time, and don't even know myself, it's just that I want a little bit of time to figure out what I really, really, really want to do."

Lautner is taking a bit of a break after promoting Abduction and Breaking Dawn. He danced around the topic of whether a Gus Van Sant indie might be next on his list. "He is a very, very talented director who I've always looked up to and always wanted to work with," he said. "It's very premature, so I really don't have much to say now other than I really, really respect him and would love to work with him." Whatever his next move, Lautner said, "I want every [project] to feel special to me, and I'm very specific about that in a way -- and we've all said this to each other because we all deal with it -- it would almost be a compliment to be typecast because that's our jobs, our jobs are to make the fans believe that we are these characters. So in one sense we're trying to do that to ourselves because that's the goal with these fans. But at the same time, of course, as actors we want to be able to go off and do different things and challenge ourselves to many different roles."

A non-franchise flick was a welcome change for Pattinson, who stars in the 2012 David Cronenberg drama Cosmopolis.

"Smaller movies are great because you don't have to argue with so many people all the time, but really I kind of like arguing so there's a balance either way," Pattinson said. "[Cronenberg] is left alone by everyone because obviously he's proved himself time and time again. It's really strange, I've never worked with someone who's under absolutely no pressure from anywhere else apart from themselves and from the environment they've chosen to work in. It's kind of nice to know that the pressure is not caused by compromises, it's just they've taken responsibility on themselves and it's up to them to make it what they want and people get a lot more pleasure out of it than having to sometimes give up a lot because there is so much money involved or you're working on a franchise. You have to think about the audience and you have to think about the previous movies. ... It's a different thing in some ways."

Of course, there's a remote possibility that there's more Twilight on the horizon.

Asked whether she'd consider revisiting her beloved characters, Meyer said, "I've thought about it, obviously. People ask me about it a lot. There was a time when I thought I would never stop writing about vampires. There's pieces of their stories written, there's all this in my computer. Who knows? I'm not going to say no. Right now I really don't have much drive toward vampires. There's so much else going on, and sometimes you want to get into a new world. But the characters are always going to be alive for me."

Read more about The Twilight Saga: Breaking Dawn - Part One.