Hayden Panettiere on Fireflies in the Garden, Battling Typecasting, and the Amanda Knox Aftermath 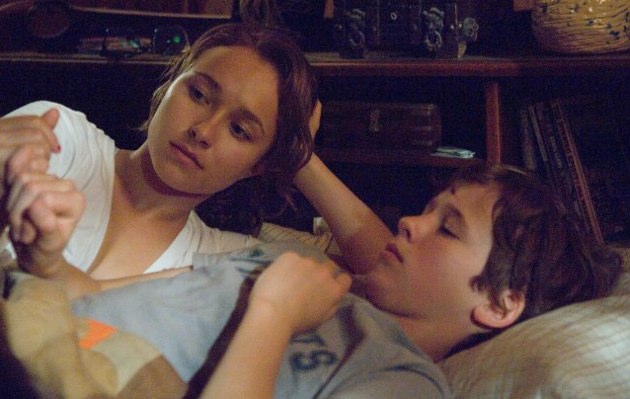 You've had roles in several films that have had bumpy post-production/pre-release processes -- Scream 4 comes to mind, too, but this is obviously the big one. Is that frustrating for you -- someone who wants the work out there, but wants it out there right?

The frustrating part of it is that you're generally known for what you did last. I've had the privilege of doing some very cool independent films that, a lot of the time, the general public doesn't see unless you're at a film festival or you're into that kind of movie. So people have this perception of what kind of actor you are and the kinds of roles you're interesting in playing, and you don't get to show them all those things that you're really proud of. It is unfortunate that a lot of people don't know or don't see that. But at the same time when growing up in this industry, one of the things you definitely have to learn is how to handle disappointment. I just don't expect anything, because you never know what's going to happen at the end of the day. My mom used to joke that you never know that you've done a film until you're sitting in the movie theater watching it. Because anything can happen up to that point, and I learned pretty early on to let things just roll off and not bother me -- to not let my hopes get up too high so that I'm super-disappointed. If it did happen, then it can be nothing but exciting. If it didn't, then it's just onward and upward. Keep on moving, and be excited with whatever comes next.

What's your relationship with the legacy of Heroes? Is that a genre you'd shy away from in the future -- enough of a shadow you wouldn't want to revisit?

That was such a specific, huge production, and it was so individual and so different from anything that's been done before. It was such a huge part of my life -- four years, and sometime we shot 10 months out of the year, 12 to 20-hour days, sometimes six days a week. I had the most amazing experience, but it did monopolize my life, and I didn't get to go off and do certain things. I'm very happy to have the chance to do that now.

It's hard to say, though, because in that genre, things can change so much. If it's good material and good people and a character, then you never know what you're going to do at the end of the day. Which, as I always say, is what's exhilarating and exciting about this industry, and what's [also] absolutely terrifying and unsure and unsteady. But you never know. I'm definitely concentrating on doing different things, though, and playing different characters. Playing such a specific role -- young, female, all-American cheerleader -- you definitely tend to get typecast.

Well, that's the other thing. You do play a lot of younger, high-school-age women. I saw you're attached to Downer's Grove--

I'm not doing that.

Oh. IMDB fail! Sorry about that.

No worries! It's hard to get that stuff off there.

OK, well, as you mention, the type is always there. At what point do you say, "You know what? I'm not doing these anymore?"

That's a good question. It's always been up for discussion and up for debate. As much as there's a part of me that wants to grow up and explore different things, once I'm out of this age group and this kind of movie, you can't really go back. So there's part of me that says, "Well, if I'm going to do it, this is the only time I'm going to be able to do it." I have all the time in the world -- well, hopefully all the time in the world -- to do those other projects. It's a rare case when you can go back.

How, if at all, does that approach apply to voice work?

It's so character-y. I've completely changed my voice for certain characters. In animated films you rarely run into cases where you feel like you're playing the same character.

I guess what I'm getting at is if typecasting can possibly exist in voice work.

I've not found so, considering I've played a bug, a lemur, a Japanese girl...

Little Red Riding Hood. There isn't too much typecasting there. I've played Tinkerbell in one of the Scooby-Doos. And actually... [To publicist] What is going on with that show that's like Family Guy that I went in and recorded?

Yeah. I didn't know if I could say anything about it. But I have gotten to play completely different characters.

Is that why you focus so much on that part of your career? For those broader opportunities?

Yeah! Absolutely. They're fun, they're easy in a lot of ways, comparatively. They're nowhere near as time-consuming. It actually becomes funny: You'll go in for one session, and it could be six months, and you go into another session, and you're like, "Wait a second; when is this movie supposed to be coming out?" They take so long to do the animation and the voice-work, and that come together over such a long period of time, but it's such an easy thing to do. I don't mean that it's not work and challenging, but it's just one of those things where you can say, "Sure! I can come do that. I'd love to!" -- as opposed to blocking out months for something.

And you don't have to get all dressed up!

And you don't have to get all dressed up! And you can do it from anywhere. I was over in Germany once, and they were like, "Oh, we need you to record. We're going to get you a studio over there." And they'll just do it over the phone. It's pretty wild.

What's your take on the recent developments with Amanda Knox -- and I guess your relationship with the legacy of that project?

It's... [Pauses] It's really surreal. Having played this girl and, if you will, having walked a mile in her shoes in a certain way, it would be very hard for me not to feel some sort of joy for a young girl to have a second chance at life, regardless of what happened. It's such a complicated case, and there are so many things that were just done really improperly. It's horrific. It's really horrifying, some of the things that they did. But I'm no expert, and I'm not in any position to say one way or another. But I will say that she's gotten a second chance at life, and I hope that she makes the best of it.

"One way or another" in terms of her guilt or innocence?

Guilt or innocence. I don't think anyone will ever know exactly what happened. It's such a confusing case. I hope no one gets mad at me for saying that there's a certain gift to be taken out of an experience like that, but it's kind of human nature to have your sense of appreciation for things dulled over time. People can't help but become jaded, and the simple things that made them so excited and that they appreciated so much when they were younger, as they get older, that excitement can be very difficult to find or hold on to. I'm sure it's been a nightmare for this girl, and I'd never try to imagine what she's been through and how she feels, but there's something to be said for getting that second chance. You can't re-teach that appreciation for being able to walk down the street, or being able to lie down on grass. And as much as you try to stay appreciative of everything, it's a very difficult thing. It doesn't make you a bad person, but it does tend to drift away. So even though she's been through such a horrific thing, it must be an amazing feeling to look at everything in perspective and appreciate every single thing you have.

Since I was totally misinformed on one film, what is coming up for you that you're looking forward to?

I was supposed to go do a film this month called Over the Wall, which has been moved to next year. It's myself and Melissa Leo and Freddy Rodriguez, and it's a very dark independent film. I play Freddy's wife -- speaking of trying to get out of that age group. It'll be a really new character for me to play. And I'm nervous! But I've been told over and over again, when you're nervous, that's when those moments of brilliance come out -- when you don't quite trust yourself. And I'm excited about it.