The Very Busy Chris Pratt on Preparing for Moneyball, Goofing in What's Your Number? and Ten Year 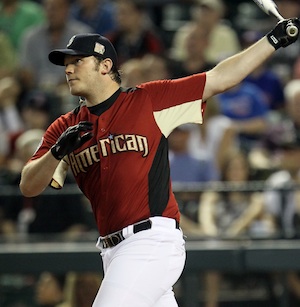 Did you meet the real Scott Hatteberg before shooting?

It was actually Bennett who convinced me that it would be OK to meet Scott. A.) I didn't read the book until we were done shooting, and B.) I wasn't sure I wanted to meet Scott because -- like I said -- when I read the screenplay I knew exactly how I'd do it. I thought, 'My first instinct is very strong, and I don't want to start second guessing it. Because we are making a movie -- we're making a movie based on this roadmap by Aaron Sorkin. I want to stay true to the screenplay.' I didn't want to be halfway through shooting, 'Well, you know, Scott actually did this.' No! I want it to be exactly how it's written in the screenplay because it's good and it made me cry. That's the story I want to tell. I told that to Bennett and he said, 'No, I respect that.' Then partway through he said, 'Just so you know, if you met Scott, I don't think it would change anything of what you're doing.' It turned out Scott and I are actually quite similar. We're from the same state, we're both outdoorsman -- fisherman, hunters. He's a really fucking great guy; a family man. Bennett said Hatteberg is going to come down, and he's going to be onset with his family for a bit. 'If you wanna stay away I understand.' I said, 'No, that's all right.' So I did meet him halfway through, but it was after I'd done a bulk of my dramatic work. It was more toward the technical baseball stuff. I was thrilled to get to meet him; it worked out perfectly. I was able to stay true to exactly how everything was in the screenplay, but then also get to meet the person that I'm trying to play in a movie. It was really the best of both worlds.

This is poised as a potential major Oscar contender. You likely didn't think of that during the shooting process, but on the cusp of its release, do you find yourself excited at the awards-season potential?

I suppose! I never really thought too much about that. I don't know if it makes me more excited than I already was. From the moment I read the screenplay, I've been 10 out of 10 excited about it. I'm just more excited that I got the chance to do something where I don't have cake all over my face or I'm falling down on rollerblades. It was nice to do something different, that excited me. Bennett is an extraordinary filmmaker, and the whole process was really different. That excited me. The possibility of maybe being able to do more serious turns in respected films as well. In terms of all the buzz -- you can't get too caught up in that. The only way to survive in Hollywood is to not get caught up in anything. You learn quickly that for all the opportunities there are to raise expectations, they're almost never met.

You're obviously so great at comedy, is drama something you want to explore more?

Yes, absolutely. It doesn't come as naturally -- I don't have as much experience doing it. Comedy is something that when you're onset, it just kinda happens. You can't really explain it -- you try things and you know. That's the big difference between comedy and drama. You know when comedy is working. You do a take and in your head you think, 'OK, that's the funniest take of all.' When you do drama you're like, 'I have no fucking idea if that was good or not.' The process of drama falls so much more on the filmmaker than with comedy. With comedy, it's a combination of knowing the comedic beat was good -- it made you laugh, it made people on the crew laugh. With drama, you do something deep and if your stuff was really effective, the ultimate result is silence. Silence is not necessarily... that would also be the result if you sucked. That challenge is what makes it such a turn-on.

Speaking of comedy, you've got What's Your Number? with your wife, Anna Faris, opening the week after Moneyball. Every time that trailer played in theaters this summer, the audience I was with laughed hard at your scenes.

It's a very integral part, but it's small. It has a runner through the course of the movie. I play a character who was named Disgusting Donald -- and I saw that movie and, by the way, it is so fucking good. I'm so excited for it. I'm so proud of Anna for her work in this movie. It is so good. It's so grounded -- there are broad strokes of comedy, but it's really grounded and centered on a character with real heart. I'm dying for people to see it.

It seems like a perfect time for this film to come out, especially after Bridesmaids and Bad Teacher really opened the door for female-fronted comedies this summer.

The American audience has really opened up to women being A.) funny and B.) kinda crude. Bridesmaids is R-rated, and I think it was a major coup for women to have an R-rated comedy that did really well. Same as Bad Teacher. Anna's movie is rated R. I think people are really going to like. It might be the perfect timing for it -- people are ready to see women play roles that are more than just 'the woman'.

Both Moneyball and Ten Year are premiering in Toronto -- are you going to get to go?

I'm hoping we'll be able to go, but my obligation now is to Parks & Recreation . But I'm really hoping to go. Ten Year was probably -- I might say Ten Year was my favorite filming experience of anything I ever worked on. It was totally different from Moneyball in that it was a small budget, independent movie. It had a giant ensemble of actors, all of whom were basically working for free. It takes place over the course of one night at this ten-year high school reunion. We shot in the hotel where we were staying, and it felt like it was acting camp. Everybody who wasn't in a scene was at the bar, hanging out. I went from 220 pounds that I cut down for Moneyball to almost 270-280 pounds for Ten Year. I gained -- shit, like 50 pounds to play this fat, alcoholic character. That made it really fun. I would drink dark beer every night. I would have a double order of pancakes every morning. Burgers for lunch. Fries, snacks, candy. I ballooned my weight up. It was probably very unhealthy, but it was so fun.