Blind Camels, Idiot Execs, and 5 Other Ishtar Revelations From Director Elaine May 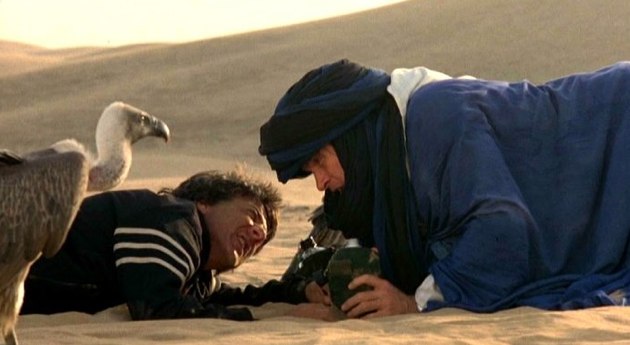 4. She's (mostly) used to your Ishtar jokes by now

"The thing about Ishtar," May said, "is that there are so many gags about it. The Golden Girls is being replayed, and I saw some episode of it, and they made a crack about Ishtar. Somebody quoted me as saying this, but I really did say it: If half the people who had made cracks about Ishtar had seen it, I'd be a rich woman today. [...] I think Ishtar is just an easy thing to make fun of. I think it really made me think that maybe before I jump on the pundit bandwagon, I should actually look at what I'm making fun of or insulting."

5. She never wanted to direct in the first place

"I've had a lot of trouble with all my movies," May acknowledged. "I'll just admit that. I didn't want to direct -- I wanted director approval [as a writer]. And I had this guy representing me who was like the last of the crazy agents. His name was Hilly Elkins, and he said, 'They won't give you director approval, but you can direct.' I really didn't want to. I wanted to write. And they said they'd pick the director. And I couldn't have actor approval, but I could be the girl. Or else they'll use Carol Channing, who is really good, but I thought wrong for this. So I said I would direct.

"I knew about acting, but I knew nothing about film. I thought one of the big lights on the first day of shooting was the camera. It was a really screwed-up production. It really was. One of the guys said, 'The camera isn't here yet.' [...] And I didn't know you were supposed to cover a movie. I had written my shots out brilliantly, but I didn't realize you were supposed to shoot two angles in order to cut. I thought you just took the film out of it. So at the end of the first week of shooting, I was four weeks ahead of schedule. I went into the editing room and said, 'This scene is too long; take that out.' And he said, 'I can't; there's no coverage.' Then the next week I was four weeks behind schedule. [...] I must say, if you screw up enough, you really learn a lot."

6. Despite all appearances, she's still working -- just not directing

May briefly confirmed her contribution to Relatively Speaking, a triptych of one-act plays with fellow writers Woody Allen and Ethan Coen and director John Turturro. (It opens this fall on Broadway), but added that she has no filmmaking prospects on the horizon.

"It's hard," she said. "You'd have to be offered a movie that's worth your time and your struggle, and I haven't been. Once in Los Angeles, years and years ago, I was in a restaurant where a lot of stars go. And somebody said to me, 'What are doing now?' It was some actor. And I said, 'Nothing.' And they looked at me as though I'd said I had cancer. They were horrified. No one had ever said that; no one had ever said 'Nothing.' No one had ever said, 'Well, I didn't get a good enough film.' So I'm telling you now: I haven't been offered a film I'd want to direct, and that's why I haven't directed any."

7. The long-awaited Ishtar Blu-ray is on its way. Promise!

Despite -- or perhaps because of -- its notoriety, Ishtar has never been available on DVD or Blu-ray. Even an announcement last year that Sony had the latter in the works for early 2011 has yielded zilch. May insists she has nothing to do with it. "Earlier today," she said, "somebody said that they had read on the Net that the impending [Blu-ray] release of Ishtar had been delayed by my 'people.' And I was so thrilled to think that I had 'people'! And that my 'people' had power! And I thought, 'Who are they?' They could only be the Jews. I have no other people."

Indeed, it's up to Sony, which bought Columbia in 1989, to pin a date to its imminent Ishtar video release. And it is imminent, according to May. "They tell me now -- Sony -- that they're going to release this on Blu-ray, and it will really look wonderful and sound wonderful. If they don't, you'll be the last 80 or 90 or however many people to see this movie in this particular version. [...] If you all clap your hands and believe it! They say they want to and they'll do it soon, and I have great faith that they'll do it."