Rose Byrne on Bridesmaids, X-Men: First Class Sequels, and the Films That Made Her Career 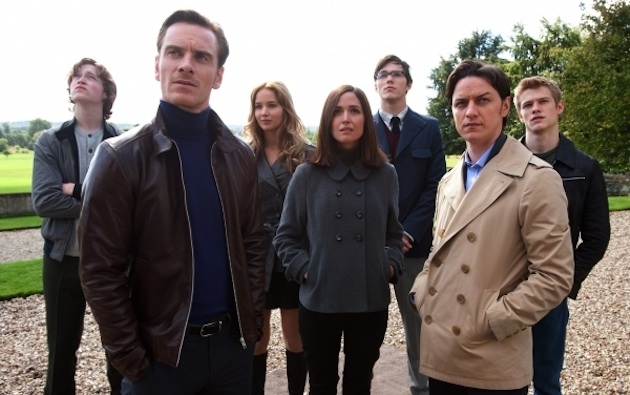 You must have flown to the X-Men set immediately after filming Bridesmaids. How did that timing work out? You were one of the last actors to join the cast, right?

It was within a few weeks, because I remember telling the girls on set that I had an audition and found out about it. And I was, again, very lucky because it just fell between the times of when Damages would begin again. I think I did come in fairly late in the audition process for Moira McTaggert -- I think they had started shooting by the time I got there.

Moira is a very familiar characters to X-Men fans who have pored over their comic books for years. Coming into the character, how did you approach her -- especially considering that, although she's a human and not a mutant, she's quite progressive in her thinking at this point in time?

She is! Well, in the comics she's a genetic doctor so she's a specialist in mutations and mutant forms, but in this version of the comics she works for the CIA. And she's a woman in a man's world, she's very feisty and ambitious -- you know, she's got a toughness about her which I liked. But she's very progressive and believes that humans and mutants can co-exist peacefully and they can help one another, and she hatches a plan with James McAvoy's character Xavier to get the mutants to assist the government in this huge conspiracy, which is set against the backdrop of the Cuban Missile Crisis. She's very impassioned and has a lot of tension between her and Michael Fassbender's character, and then there's also sort of a romance between her and Xavier.

Oh, yes. Moira and Xavier have a famous romantic relationship in the comics. How much of that relationship will we get to see?

I think it's more of a hint than a full painting, or whatever the metaphor might be. [Laughs] But there's definitely a flirtation and an affection; they're allies, so from the start they're there for each other.

Looking forward with this franchise, are you signed on for an entire new X-Men trilogy?

Yes. I have no idea, I can't speak for other people, but yeah, I signed up for the whole bonanza. This and another two.

So maybe we get to see more of that romance down the line.

Yes! I think there's definitely more life in it, a lot left to take place.

I think for most people, the idea of James McAvoy and Michael Fassbender going head to head in a film is quite tantalizing on its own. Did you get to spend time with both of them on set and in your scenes?

[Laughs] I did -- most of my stuff was with James, but I had a lot of ensemble pieces with a lot of the cast. They're both wonderful in different ways; James is very smart, really clever with dialogue, really great with character, has an endless enthusiasm and energy and he's really passionate about his work and a lot of fun. And Michael is brilliant. I think the tension between those two guys will be really interesting. Their relationship is the heart of the film. Michael has such a devilish streak in him that it really gives a whole new dimension to Magneto. I think it's very exciting for fans to be able to revisit these characters as young men. What a pleasure, for fans to be able to say that.

Looking at your career thus far, one could argue that it progressed in stages; from Australian TV to film, from indie projects to increasingly larger scale films, to Damages and to comedy and beyond. So which films do you consider to have been most pivotal for you professionally?

Probably, in terms of film I'd say Troy. It was when I was very young and it was a huge studio film opposite Brad Pitt, and it was great exposure and a very prestigious cast. And I was unknown, so that was a huge break for me when I was in my 20s. And then the other two I would say would be when I was cast in Damages opposite Glenn [Close] -- that was a time when not everybody was doing television and it was on cable, but it was a huge turning point for me in terms of people getting to know my work and getting exposed in TV. And then Get Him to the Greek, because that was a totally different genre. Those three were definitely the most pivotal in terms of the way the industry saw or sees who I am, I suppose.

And yet there's somewhat of a gap in your filmography. I am, of course, referring to the action genre.

[Laughs] That's hysterical! Yeah, I guess there was a bit of action in 28 Weeks Later, but I've never done an out and out action film.

I'd like to see you tackle that next -- Rose Byrne, action star. Why not? It's practically the only genre you haven't explored yet.

Thanks! That's lovely, I'll take it to my agent. The next genre to conquer!