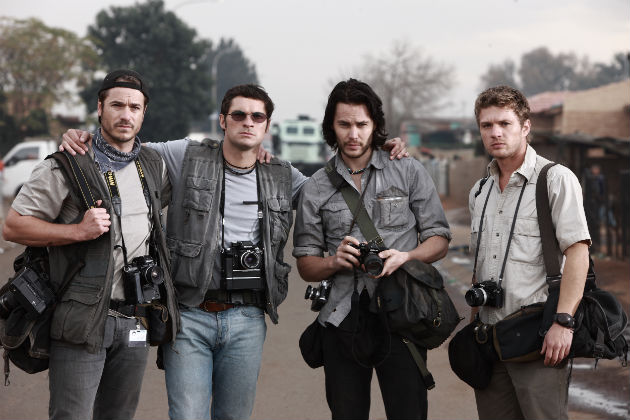 What did it feel like to film on location in and around Johannesburg, especially during the huge, chaotic re-stagings of violent skirmishes that really happened, filming with locals who lived through it?

To have these recreations, it's hard not to be present. I mean, you've got to make an effort to get out of that scene. It's a lot easier that I've been doing a lot of green screen lately, where literally a star on a hundred-foot green screen is a ship or something. So I felt so lucky to be in South Africa in these townships, working with people that have marched and fought. People that had relatives killed. All that just raises your game to do it, and do it right.

Did it ever feel dangerous?

There's one scene, actually. We had these tanks, they're like six feet high, and they're coming around the corner. You know they're fake bullets, like the sound. But there was one time where I thought I was gonna... and I fell pretty hard one day, because I was just going all out and there's this grassy knoll and Kev is leading the way with Marinovich, and I slipped so hard into glass and cut my whole leg up. Everyone stops and I'm like, bleeding out or whatever. And it's just like, this is nothing compared to what people were actually going through.

Yeah! So you just kind of just laugh at it. But like I said, we were very lucky to be shooting near the townships and the killing fields and that kind of stuff.

Raw. And it shows in the film, you know? I don't think you could do it anywhere else - it would be an injustice to do that. Especially if you knew a quarter of what actually happened.

You filmed this two years ago. Did it take much time or space to decompress emotionally afterwards?

How did you do that?

[Pause] Slowly. Consciously. Just surrounding yourself with people. I live in Austin, and I think that's a huge part of it, staying out of the shit. Surrounding yourself with people that understand who you were before you left is a lot of it. And then just, you know, really being conscious of it and being okay with what you did. Letting go of it was a big thing for me, because it took a lot for me to do this and to play him the way I wanted it. I think it's okay to take your time to let it go, as well, instead of like, 'Cut, wrap, check the gates, you're good, you're out -- I'm done, I'm not Kevin.' But I think a movie like this is a lot harder to walk away from. Even when I watch it I get very emotional, because I do care what people are going to say about Kev. It's very personal to me.

While watching the film I wondered, "How do you even get away from the headspace of being in the moment?"

You don't, when you're there. And I don't want to. It's a choice you make when you take that role. Look, you're gonna probably get kind of fucked up while you're doing this, but hopefully that pays off and doing it justice is going to be worth it.

In the few years since filming The Bang Bang Club you signed onto a few larger Hollywood productions. Does it help to switch gears after such heavy material? Is that a conscious part of your thinking?

I don't know. Nothing's going to touch this in regards to heavy material, but, you know, [Andrew] Stanton has presented me with incredible challenges in [John Carter of Mars] as well, so I think they're all their own entities. Different journeys that you're going to partake in with these guys and this director and these other actors. I know this has made me a stronger person and I've grown as an actor and a person through it just because of what I did and sacrificed for it. Then hopefully you can take little tools and put them into your next thing, you know? At least the discipline or whatnot to keep that alive.

By contrast, looking at something like Battleship which seems like a huge Independence Day kind of affair -- what did that project offer you?

Personally, I think so much of it was just re-engaging with Peter Berg, who I admire as a filmmaker.

Was that Friday Night Lights connection the secret to you getting cast?

Absolutely. We've been very close since FNL, and he's been, unbeknownst to me, trying to figure out the right opportunity to re-engage. This came up and I became available and we talked a lot about it, had a lot of fun kind of just figuring out where we wanted this guy to go.

Tell me this: Is the story more complex than a Battleship movie sounds on paper?

Absolutely it is! To me personally, doing it and being part of it - look, it's called Battleship, it's a naval film on water, and that's the only correlation I could really tell you about that is close to the game. You know, maybe there's a strategic thing that they actually do use in the Navy that I'm sure 99 percent of people don't know.

Do you get to say the iconic line, "You sank my battleship?"

I can't tell you that. [Smiles] You can guess.