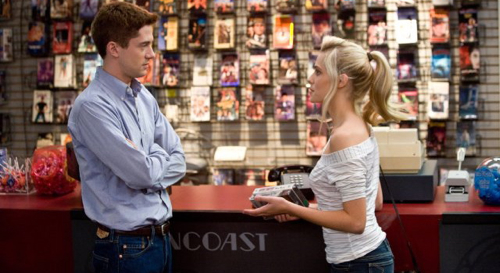 I think this movie contains the only trampoline sex scene I've ever encountered.

Wasn't that great? That was actually a re-shoot we did last year! So a few years had passed before we shot that. By then the cast was so close and Topher and I knew each other so well that it was very fluid to film. We threw in a lot of unscripted stuff. It was a very endearing scene. That's one of my favorite moments of the movie.

Where did the original love scene take place?

It was in front of a fish tank in the little boy's bedroom of the party house.

What else changed in the re-shoot?

We wanted the crux of the film to be a little bit stronger. We didn't have the whole Truth or Dare game in the first version and that is such an iconic '80s thing. Also, we wanted to draw out the kiss a little bit longer.

Once you're done promoting this, I read that you're making a documentary about happiness.

How did that idea come to you?

I was in Boston visiting a friend of mine. I was walking around on my own while he was filming a movie. I had my iPod on and I was looking around at this crowd, really studying people and I could kind of hear a buzz of negativity around me. People were angry or yelling at someone on the phone or walking around looking stressed and angry. It kick-started this thinking process about where all of this negativity comes from in a privileged country like America. From there, I realized that I wanted to do the opposite which was go to a third-world country and experience what that was like. I went to Kenya and worked with these AIDs orphans and local people. The spirits of these people who were sick and had no material wealth -- was beautiful. But what was so lovely about them is that they may not be rich materially but they are rich in other things, like community or love or spirituality. I realized that I was learning so much from them that I wanted to capture that. Hopefully I can release that someday.

So not only are you emulating Angelina Jolie onscreen but a little bit off screen as well.

I love her philanthropic values so much. That is really something that is dear to my heart. It's always been a great part of my life. My mum actually named me after Mother Teresa because my mum's a missionary. She's given up her life to look after others and she always told me when I started acting that I could really use the power I might have to help a lot of people and the greater community. I've always had that in the back of my mind and as I further my career, I think a lot about how I can help people in the good way. I'm in a blessed position to be able to do that.