30 Straight Actors Who Have Gone Gay For a Film Role 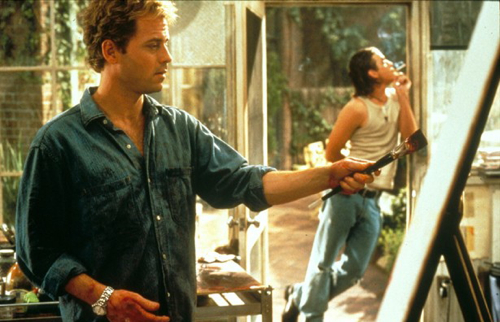 The As Good As It Gets actor earned both Oscar and Golden Globe nominations for his role as a gay artist who is reluctantly taken under the wing of his obsessive compulsive and judgmental neighbor (Jack Nicholson) in this James L. Brooks comedy.

This Todd Haynes film featured Rhys Meyers as a glam-rock icon, akin to David Bowie, in the 70's and his lover, played by McGregor.

Damon earned a Golden Globe nomination for playing an identity thieving opportunist who ultimately kills his lover to save his image in this Anthony Minghella thriller.

Hillary Swank won the first of her two Academy Awards for portraying a transgender young man who is savagely murdered after it is discovered that he is biologically female in Kimberly Peirce's indie.

This Stephen Daldry drama famously won Nicole Kidman an Oscar for donning a prosthetic nose and playing Virginia Woolf -- but it also accumulated an assortment of Oscar and Golden Globe nominations for its supporting three actors who all played gay and/or sexually confused characters.

After being sexually abused by his baseball coach, Joseph Gordon-Levitt's character turns to prostitution and crime in this drama from Gregg Araki.

Even Tracy Morgan went gay for a paycheck -- but his cartoonish turn as Ms. Tucker, a gay inmate who lusts after every other male prisoner in this Adam Sandler flick, was gravely insulting and even worse, enormously unfunny.

Hoffman's portrayal of Truman Capote during the writing of his famous book In Cold Blood, swept both the Oscars and the Golden Globes.

This stunning Tom Ford film won Colin Firth an Academy Award nomination for his portrayal of a depressed British professor who mourns his longtime partner in the span of a single day. comprehensive

· Ewan McGregor and Jim Carrey, I Love You Phillip Morris (2010)

This year's comedy featured Jim Carrey as a con artist who falls in love with a fellow inmate played by McGregor. Graphic sex and cuddling included.

· Julianne Moore and Annette Bening, The Kids Are All Right (2010)

Their roles as loving-if-dysfunctional partners and parents of two could win Julianne Moore and Annette Bening (who have already been nominated for Golden Globes) bids in this year's Academy Award race.