To close out his popular live-reading program at LACMA Thursday night Jason Reitman selected a film that seemed to tie the series and the room together: The Coen brothers’ 1998 noir-comedy opus The Big Lebowski. In the hot seat filling Jeff Bridges’ slippers as The Dude sat Seth Rogen, whose own slacker charm proved oddly suitable, with folks like Hank Azaria (as Donny), Rainn Wilson (as Walter) and Christina Hendricks (as Maude) alongside him re-enacting one of the most quotable films of the past two decades. The cherry on top? Playing the role of The Stranger originated by Sam Elliott and written explicitly for an actor like Sam Elliott, perhaps… was none other than Sam Elliott.

Also onboard for the final night of the series’s first run? (According to Reitman, the live-reads will resume again in October – blame the gap on his “day job.”) Jason Alexander as Jeffrey Lebowski; Fred Savage replacing Patton Oswalt at the last minute as the Big Lebowski’s assistant, Brandt; Nick Kroll as Jesus; and Reitman’s sister, actress Catherine, as Bunny. And of course all the while there was Reitman himself, reading along all the stage directions and fantastically detailed scene descriptions, including both of the film’s trippy dream sequences. (But, strangely enough, not Jackie Treehorn’s mysterious moment of artistic inspiration, scribbled on a notepad, which was conspicuously skipped over.)

Elliott’s surprise appearance was the special casting move of the night, a fitting gesture following Reitman’s previous strokes of genius which included tapping original director Rob Reiner to narrate the excellent Princess Bride live-read and re-envisioning Quentin Tarantino’s Reservoir Dogs with an all-black cast. With his first line Elliott drew applause (and subsequently flubbed a few words, saying his eyesight wasn’t what it used to be) but whenever he came back around to deliver another deep, mellifluous nugget of wisdom – the film’s narrator, sitting right there, narrating The Dude’s story right to the audience! -- the theater was rapt. Elliott’s vision may have gotten worse over the years, but his sarsaparilla-soaked cowboy flair is as rich and twangy as ever. Besides, this was a “Los Angeleez” story being retold in L.A., right down the street from a Ralphs to boot. How could Reitman not invite the man who so specifically inspired a character that his name was used in the script to describe the role??

In many ways, Elliott had it the easiest; the rest of the cast, through no fault of their own, battled the specter of their onscreen counterparts the whole night – a testament to the indelible performances Bridges, John Goodman, Steve Buscemi, John Turturro, David Huddleston, Ben Gazzara, Julianne Moore and Co. gave in the Coens’ film. Rainn Wilson’s Walter Sobchak was at times uproarious, especially when he, Rogen, and Azaria cross-talked like a well-rehearsed comedy trio. But his Walter was perhaps the most conspicuous example of the film’s performances overshadowing the live-read’s; no matter how well Wilson nailed Walter’s aggro-cluelessness, comparisons to Goodman’s unforgettable work kept creeping into my brain, and it was no contest. Advantage: Goodman. 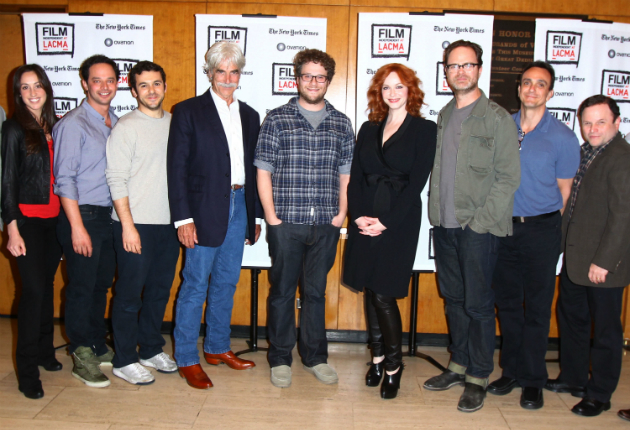 In fairness to Wilson and his cohorts, the live-read can be an extremely limiting setting for an actor. Performance here is primarily aural rather than physical, and one has to establish as best one can, within seconds of spoken dialogue, the kind of character nuance that is otherwise built through months of preparation and rehearsal. Instead of costuming and sets, you’re chair-bound on a stage staring at pages. This can work well with the right script – say, one reliant on dialogue or especially well-suited to alternate forms of storytelling, like, say, a movie about storytelling – but tackling a well-known and beloved film like Lebowski adds the additional challenge of having to compete, in the hearts and minds of your audience, with the cinematic specter of the movie they already know and love.

Also suffering from inescapable comparisons to the film: Hendricks’ perfectly good Maude, still much flatter and straighter than Moore’s wonderfully condescending version; Alexander’s Big Lebowski, highly entertaining in his pomposity but naggingly reminiscent of George Costanza; and Rogen’s Dude, effective for the most part in a highly entertaining Rogenesque way but still lacking the subtle variations that made Bridges’ turn so iconic.

On the other hand, colorful vocal performances from a few supporting players provided much-needed jolts of creative energy, including voice-over pro Azaria’s multitude of distinct voices (including an off-the-cuff Bush impersonation dropped into the opening supermarket scene as Reitman realized he hadn’t assigned the line to anyone beforehand) and Kroll’s Tony Montana-like Jesus and other assorted delightful side characters. But the biggest discovery of the night, aside from the fact that Reitman’s sister is herself quite talented at accents, was Savage, of all people. The former Wonder Years child thesp-turned-director had done a spunky version of himself months ago at The Princess Bride, but he earned some of the biggest laughs playing Jackie Treehorn’s thug, the third Nihilist, and, most impressively, doing an uncanny Philip Seymour Hoffman impression as Brandt.

I’m glad to hear that the live-read series will continue in October, because that gives Reitman time to choose his next selections and cast wisely. One flaw in his group casting Thursday night was the relative similarity in vocal range of many of his actors; variety of tone and register should help differentiate one voice from the next, giving the audience more to paint the imagination with. Viewer familiarity can be both a blessing and a curse; oftentimes during the Lebowski read it felt as if the room was just waiting to hop from one iconic line to the next, laughing along more out of recognition than from the discovery of new and unexpected nuance in the way, say, our hero wakes up to find his rug missing, or struggles to spit out the simplest of platitudes.

And while live-read regulars like Kroll (not to mention Mindy Kaling and Oswalt) have absolutely killed, I’d encourage Reitman to think more and further outside the box as he plans his next run. A friend suggested gender-switching as a potential way to keep the energy of these sold-out shows going while daring to push the envelope – why else stage a live-reading, except to explore “what might have been” (i.e. Tom Selleck as Indiana Jones, Christopher Walken as Han Solo) and “what will probably never be?”

I’m still convinced that the live-read concept may never turn out as magically as it did with The Princess Bride, a quotable classic built on unforgettable film performances and a fantastic script that nonetheless lent itself well to re-imagination. Following along those lines, with a varied and vocally interesting cast in place, what films should Reitman consider next? Here are my suggestions, off the top of my head: Pulp Fiction, The NeverEnding Story, The Goonies, Annie Hall, Casablanca, Fight Club. But, you know. That’s just, like, my opinion, man.